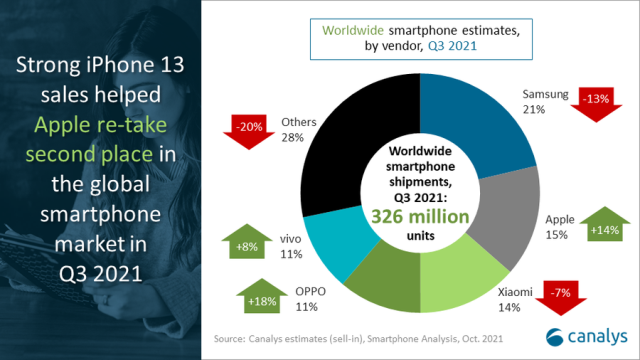 The Cupertino, California-based company does not share the number of shipments of iPhones. The IDC report indicated that Apple shipped 50.4 million iPhones during the September quarter.

“The iPhone 13 had a strong start,” said Canalys Research Analyst Le Xuan Chiew. “Pre-orders were high and, unlike last year, Apple could use the full might of its retail stores to drive sales. For customers with a two- or three-year-old iPhone, the devices have proved a compelling upgrade, with better cameras, battery life and, of course, 5G.

Apple’s performance goes far beyond the iPhone 13. For example, it sustained the momentum of the iPhone 12 with wholesale discounting behind the scenes. It is making rapid progress with new B2B channel initiatives.

Apple will face supply pressures and has softened its iPhone production target for Q4 2021, says Canalys said. “Apple is a sourcing powerhouse, its high-end devices make it less exposed than many competitors, and it will be aiming for the number one spot next quarter,” Le Xuan Chiew said.

Supply chain woes cost Apple $6 billion in sales during the company’s fiscal fourth quarter. Apple CEO Tim Cook said that the impact will be even worse during the current holiday sales quarter.

Cook told Reuters the quarter ended Sept. 25 had larger than expected supply constraints as well as pandemic-related manufacturing disruptions in Southeast Asia. While Apple had seen significant improvement by late October in those Southeast Asian facilities, the chip shortage has persisted and is now affecting most of our products,” Cook said.

Nabila Popal, research director with IDC’s Mobility and Consumer Device Trackers, said: “On top of component shortages, the industry has also been hit with other manufacturing and logistical challenges.”

“Stricter testing and quarantining policies are delaying transportation and power supply constraints in China are restricting manufacturing of key components. Despite all efforts to mitigate the impact, all major vendors’ production targets for the fourth quarter have been adjusted downwards.”

Cook said the company expects year-over-growth for its quarter ending in December. Analysts expect growth of 7.4 percent to $119.7 billion.

“We’re projecting very solid demand growth year over year. But we are also predicting that we’re going to be short of demand by larger than $6 billion,” Cook said.