Samsung’s latest Galaxy S4 has already incorporated the technology within its handset. Lava Iris 504q, a smartphone from Lava International, has unveiled its phone gesture features.

“Today’s consumers are becoming much savvier with their smartphones and they’re looking for new interesting ways to communicate with each other and their devices,” Flood added.

In 2013, almost 12 percent of smartphones shipped will have vision-based gesture recognition capabilities.

It’s not known whether device major Apple will include the technology in its next generation iPhone. However, the company is expected to include a full array of MEMS sensors and NFC.

Apple this week said it will soon come out with innovative products.

ABI Research says accelerometers and gyroscopes play a crucial role with today’s mobile devices, enabling devices to be more intuitive and take action without a user pressing a button. Simple actions like switching from portrait to landscape when a smartphone is tilted are made possible by including these components. 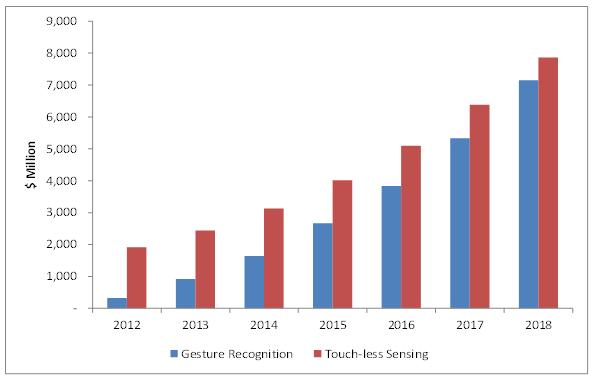 Additionally, the fast growing mobile gaming market is highly dependent upon smartphones including gyroscopes, which enhance gaming experience. Nearly half of the smartphones shipped this year will include these MEMS sensor types.

NFC has been one of the most talked about mobile technologies that has not quite taken off. The technology has primarily been focused around mobile payments; however, mobile OEMs have begun to see other potential capabilities for the technology such as photo-sharing and location information tag points that could open a huge market for advertising and marketing campaigns.

Within three years, it is anticipated one in two smartphones shipped will include NFC and have gesture recognition capabilities. Furthermore, accelerometers and gyroscopes will be the “norm” with most smartphones.

Note: the chart is not part of ABI Research predictions