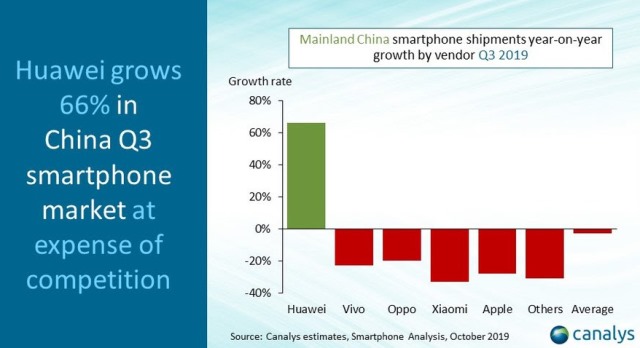 Huawei shipped 41.5 million smartphones to grab a market share of 42 percent, an annual growth of 66 percent. This is Huawei’s sixth consecutive quarter of double-digit growth amid a gloomy China market.

The smartphone market share of Oppo, Vivo, Xiaomi and Apple shrank further. Their total share only accounted for 50 percent of the market, down from 54 percent in Q2 2019, and 64 percent in Q3 2018.

Huawei has 25 percent more share than this quarter’s runner-up, Vivo.

Nicole Peng, Canalys VP of mobility, said: “Huawei’s dominant position gives Huawei a lot of power to negotiate with the supply chain and to increase its wallet share within channel partners.”

Huawei is in a strong position to consolidate its dominance further amid 5G network rollout, given its operator relationships in 5G network deployment, and control over key components such as local network compatible 5G chipsets compared with local peers, Nicole Peng said in a statement.

Smartphone shipment of Vivo, Oppo and Xiaomi fell, despite pushing new smartphones to the market.

In addition to Huawei, Vivo, ZTE, Xiaomi and Samsung launched 5G-capable smartphones between $500 and $1000.

Canalys expects 5G tariffs and device prices to fall rapidly to attract mass market consumers, with similar intense competition to the 4G era among major vendors, causing first-mover advantage in 5G to diminish in next to no time.”

Apple maintained the number five position, thanks to the boost of iPhone 11 launches in September, which accounted for nearly 40 percent of its Q3 shipments.