The mobile phone manufacturing eco-system has saved the country India approx. Rs 3 lakh crore or $43 billion through the replacement of CBU imports through domestic assembling / manufacturing of handsets during the past four years. 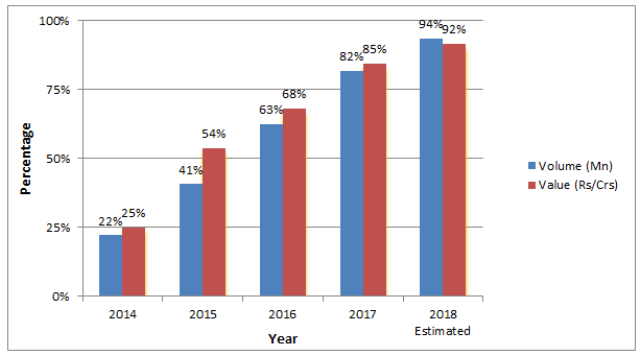 Phone companies have manufactured or assembled over 225 million handsets in 2017-18 in India which was approx. 80 percent of the total market requirements. The foreign exchange savings is estimated to be over INR 60,000 crore.

CBU imports have come down drastically, while import of sub-assemblies and components has gone up, according to ICEA (India Cellular & Electronics Association).

India’s mobile handset and components manufacturing industry enabled the setting up of over 120 new manufacturing units generating employment for over 4.5 lakhs in the last four years.

Mobile phone imports will dip to the insignificant level of around 5-7 percent of the market or less than INR 1,000 crore per month by the end of FY 2018. India is moving towards almost Zero Imports for mobile phones.

Reliance Jio, the largest 4G operator in India, will soon be moving its entire production of Jio mobile handsets to India.

“The industry has made great sacrifices to move from trading and imports to first APTP (Assembling, Packaging, Testing and Programming to PCBA population and components manufacturing,” Rajesh Agarwal, founder of Micromax and general secretary of ICEA, said.

19 companies apply for IT manufacturing under PLI scheme