The growth in mobile phone revenue was mainly due to the increasing uptake in smartphones. 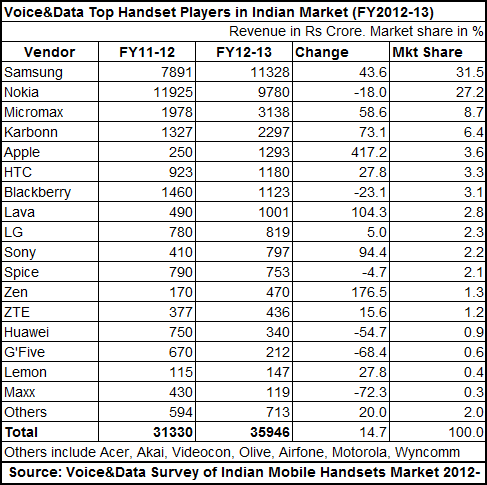 The Finnish handset maker had been holding the fort for over a decade, according to Voice&Data 100.

Voice&Data 100’s phone market report is based on revenue of phone makers and not based on shipments.

Nokia’s drop in market share started when the company failed to sense the need of a dual-SIM phone for the Indian consumer, and the same was tapped by the Indian players years ahead of global players like Nokia.

Apple revenue rose 417.2 percent to Rs 1,293 crore in FY 2013 compared to Rs 250 crore a year back. The company enjoys 3.6 percent market share in India with the smallest number of handset models in its portfolio.