Telecom Lead India: Intex Technologies on Monday said it would launch 20 new smartphones in the next quarter.

Intex has already launched 12 mid-segment smartphones under its Aqua range.

Sanjay Kumar Kalirona, GM-Mobility Division, Intex Technologies, said: “The smartphone penetration is witnessing an upward swing in India and is encouraging for handset companies such as Intex to innovate and put forth offerings that combine the latest technologies and features at an affordable price.”

Most of its smartphones are available from 15,000 distributors, reseller outlets and more than 40 Intex Squares (exclusive retail stores), several hypermarkets and e-commerce portals across the country. 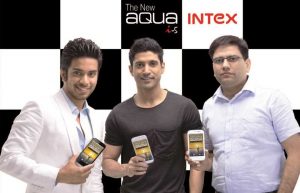 Meanwhile, Intex Technologies has launched its Intex Aqua I-5 smartphone in India. The new phone is powered by 1.2GHz Quad core processor and runs on Android 4.2 (Jelly Bean).

Sporting 2000mAh battery, the new smartphone provides a talktime up to 5 hours and about 7 days of standby time, ensuring a strong battery backup, Intex said on Monday.

The phone comes with Quadcore cortex A7 processor with power saving features that reduces power consumption by nearly 30 percent. It is loaded with SGX 5T GPU with 5 inch QHD IPS LCD display screen.