Japan’s smartphone market will struggle in 2020 despite the launch of 5G services by KDDI, SoftBank, NTT Docomo and Rakuten Mobile. 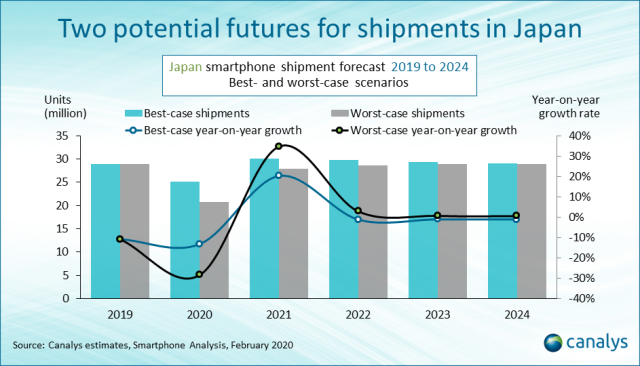 Canalys forecasts Japan’s smartphone market will struggle in 2020, following a 10.9 percent drop in shipments in 2019. Market players are dealing with the full impact of new regulations on subscription pricing this year.

5G would not stimulate the market, and the postponement of the 2020 Olympics is set to hurt business of Apple, Sharp, Samsung, Sony and Kyocera.

Canalys expects delays to 5G smartphone uptake and 5G infrastructure developments, given local operators are cautious with spending on device subsidies and Capex in the face of such uncertainty.

Japan’s smartphone shipments are expected to fall by 13 percent to 25.1 million units this year.

“Unemployment will rise, and people are being discouraged from heading out to malls and operator retail shops, which account for the bulk of smartphone sales. As people have little appetite for pricey 5G plans and devices in an economic crisis, operators will have a longer payback period to recover their massive initial outlay on 5G deployment,” Canalys Research Analyst Shengtao Jin said. 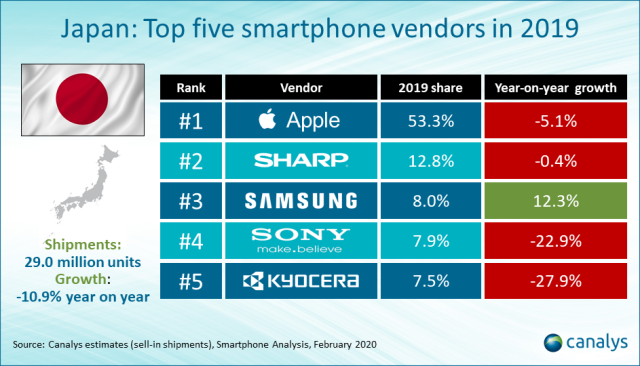 The telecommunications regulation is forcing operators to separate handset prices and usage bills in a bid to help consumers make more informed decisions. The clearer pricing structure and reduced subsidies will mostly affect vendors such as Apple and Samsung, which have a big share of the flagship segment.

“The incumbent operators are also feeling the heat too, as Docomo, Au and Softbank rolled out competitive packages to defend against MVNOs and the country’s fourth operator, Rakuten, which launched an unlimited data plan for a fraction of what the incumbents charge,” Shengtao Jin said.

Samsung made a surprise move into the budget segment in Q4 2019, with its Japanese edition of the A20, which accounted for half of Samsung’s shipments in the quarter. The strategy came at the right time, when Japanese consumers were feeling more price-conscious.

Samsung’s biggest challenges will come from Oppo and Xiaomi in the growing budget segment.

Oppo shipped 269,000 devices in 2019, mostly from the Reno A series – devices tailor-made for Japanese customers. Oppo’s celebrity endorsement tactics with Sashihara also played a part in popularizing its brand.

Xiaomi made its move into the competitive Japanese market in 2019, timing its entry to target early 5G adopters. Both vendors have secured important operator channel deals, paving the way to take more share from local vendors.