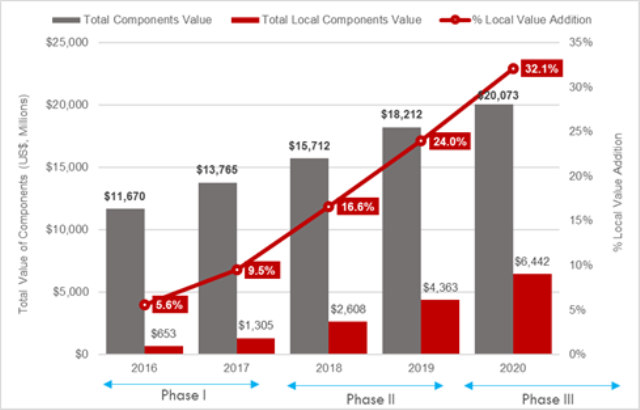 The contribution of India manufactured mobile phones has grown from 14 percent in 2014 to 67 percent in 2016, but the value of sourcing within India is yet to grow because phone makers still import kits from abroad.

Contribution of India manufactured mobile phones is estimated to contribute 96 percent by 2020.

A joint study from IIM Bangalore and Counterpoint Researchers said percent of the handsets manufactured in India contribute to 6 percent of the true local value addition with most of the OEMs still importing Semi Knocked Down components (SKDs).

Counterpoint Research’s Research Director and co-author of the study Neil Shah said this study has identified and analyzed more than 60 components and sub-components going into a phone and the possibilities to drive localization of these components over the next five years. 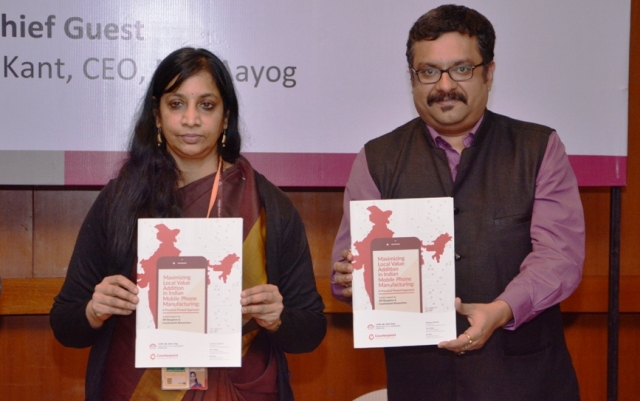 “Sourcing and assembling key high-value components and sub-components from local manufacturers will drive greater value addition. This will drive the true local value addition to more than 30 percent by 2020 and potentially to as much as 50 percent thereafter,” said Neil Shah.

Under the phased local value addition plan, the components under Phase I plan (2016-2018) like Battery, Chargers, Cables, Housing, Packaging and others can be localized completely, thus driving the true local value addition from current 6 percent to 17 percent in two years. 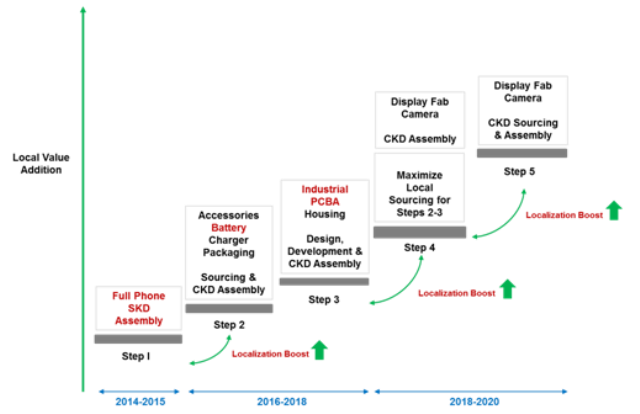 Components under Phase II plan (2018-2020) like Display, Camera and their sub components can further increase value addition from 18 percent to 32 percent by 2020.

Phase III plan will include possibility of localizing the semi-conductor components post 2020 including setting up semi-conductor fab and thus driving the ‘true local value addition’ beyond 33 percent.

India, which surpassed the USA to become the second largest global smartphone market in terms of users in early 2016, is on track to cross half a billion smartphone users mark within the next five years.

In this five-year period, close to a billion smartphones, together with almost half a billion feature phones, that will be sold in India, will consume more than US$80 billion worth of components. This offers a huge opportunity just from domestic demand perspective to manufacture mobile phones in India and increasingly source components locally, thus, reducing the dependency on imports.

“Under the proposed plan, we estimate that more than $15 billion worth components will be sourced locally over the period of five years through 2020, realizing not only significant savings in foreign exchange, reducing the level of imports but also assisting the creation of over million direct and indirect jobs,” said IIM Bangalore’s Professor Chirantan Chatterjee, from the Corporate Strategy and Policy Area, who is the lead author of the study.

While India is the second largest country in consumption of mobile phones globally, this plan can transform India into a global manufacturing exports hub adding further to the country’s GDP and balance of trade.

Make in India initiative has been successful at driving indigenization of assembly of mobile phones. The number of mobile phone and related components manufacturing facilities are estimated to exceed 50 units by the end of 2016, up from two units before the Make in India program was announced.

More than 180 million mobile phones will be assembled in India, out of the total 267 million phones to be sold in India in 2016.

The overall true localization rate of manufacturing and sourcing components will be under 6 percent of the total value of $11 billion worth components going into those 267 million phones in 2016.

Comparatively, China which has raced ahead to build a local manufacturing ecosystem is seeing localization rate of almost 70 percent.

South Korea and Taiwan have crossed 50 percent localization of components. Emerging hubs such as Vietnam and Brazil are seeing local value addition around 30 percent and sub-20 percent level respectively.

Image: Aruna Sundararajan, secretary, Ministry of Electronics & IT, Government of India, releases a joint report by IIM Bangalore and Counterpoint Researchers on Maximizing Local Value Addition in Indian Mobile Phone Manufacturing and Chirantan Chatterjee, faculty member, IIMB and one of the authors of the study.