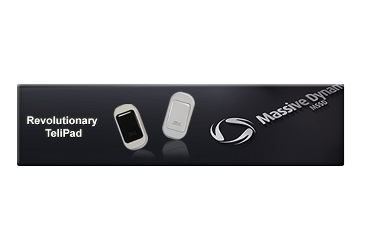 With this launch, the company has opened itself to the highly competitive smartphone market dominated by leading players like Apple, Nokia, Google and Research in Motion.

What really sets this new TeliPad apart from smartphone competitors is that it “adds” a two-line smartphone to an existing Apple Inc. iPad (including the Mini), Android tablet or Windows tablet, the company said.

The new TeliPad product from Massive Dynamics eliminates the need to carry a separate smartphone if you already own certain computing tablets. Because of its two line functionality, the one TeliPad device actually takes the place of two smartphones and a tablet, by making the tablet all that you need to carry to fully communicate and interact online and on the phone.

“We feel that this helps eliminate Massive Dynamics as being a one-on-one competitor as you still have to own or buy a computing tablet for the TeliPad to work. However, the TeliPad is much more economical to buy than most smartphones,” said Oscar Hines, president of Massive Dynamics.

The TeliPad is about the size of a credit card and can be adhered to the back of your computing tablet or kept in close proximity, since it works via Bluetooth. The TeliPad is compatible with iOS, Android and Windows tablets. The smartphone function is designed to work on AT&T, Verizon, T-Mobile, and Cellular One networks or any network that supports SIMM. At this time, the TeliPad is not supported by Sprint network systems technology.

Massive Dynamics is a Nevada-based company dealing with communications technology and products – mainly focusing on the profitability of the oncoming universal Web 4.0 technologies. Web 4.0 centers mainly around systems that involve “Intelligent Interaction” with users. The Company is currently planning to announce several Web 4.0 product advances over the next 12 months.