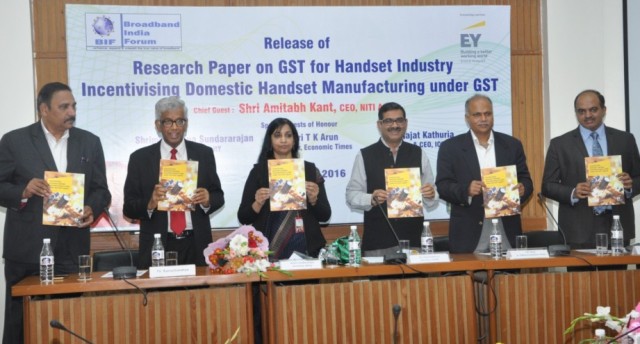 Broadband India Forum (BIF) says there is a strong need to offer incentives to domestic handset manufacturing under GST regime.

With the introduction of GST, most of the current Centre and state taxes / duties will be subsumed under GST. The Excise duty on manufacture which was a single point tax and the basis for all incentives would also be subsumed.

“It is expected that the incentives available to domestic manufacturers under the current regime would decrease and there is need to continue the incentives under the GST regime to meet the increasing demand through domestic production,” said Bipin Sapra, partner at EY.

GST alone is not the driver for incentivizing manufacturing in India. Essential factors for a sustained manufacturing environment in India are infrastructure, a robust manufacturing ecosystem, skilled manpower, technology and R&D facilities etc.

The incentive can be enhanced with a multiplier (N) to grant a benefit that is at least equivalent to the incentive available under the current regime (i.e., approximately 8 percent—10 percent) with similar value addition, and higher incentives that can be granted when the local value addition in India is more.

A study conducted jointly by IIM Bangalore and Counterpoint Researchers highlighted that the value addition in India is approximately 6 percent under the current state of manufacturing in India. This can be increased up to 32 percent by 2020 wherein the most of the manufacturing processes in India.