Addressing the first quarterly meet with analysts today, Nokia CEO said that a lot has changed in the industry compared to a year ago.

“For example, the distance between the various Android participants seems starker than ever before as the dominance of one hardware vendor becomes more visible,” he added.

Additionally, unbranded Android and forked Android players continue to emerge from China and India creating new dynamics both within and increasingly outside of Asia. With this growth in low-priced fragmented versions of Android the Android experience is becoming inconsistent across the lower-end price range.

Nokia CEO says people are responding positively to the new innovation throughout the Lumia portfolio imaging, design and navigation are capturing attention among reviewers, operators, retail associates and ultimately consumers.

“We believe we have increased the competitiveness of our Smart Devices, and as a result Lumia is clearly making progress. We’re pleased that today Lumia is even out shipping the iPhone in countries like Argentina, India, Poland, Ukraine and of course in our home country of Finland,” Elop added. 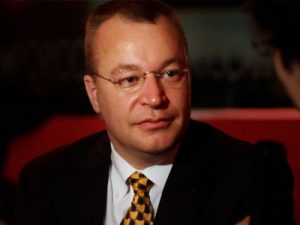 In Q1, financial income and expenses net was negative EUR 106 million, the higher expense on a sequential basis was primarily due to the absence of income received to one of our investments, which benefited last quarter results.

“We have reiterated our position that our operations are incompliance with local loss, as well as the bilaterally negotiated tax treaty between the Governments of India and Finland, and that we will defend ourselves vigorously against the claim,” Elop added.

According to a Reuters report, a big fall in sales of Nokia’s basic phones overshadowed a stronger performance from its Lumia smartphones in the first quarter of 2013.

Nokia, which has fallen behind Samsung and Apple in the smartphone race, said it sold 5.6 million units of Lumia handsets in the first quarter, up from 4.4 million in the previous quarter and in line with expectations. But overall net sales fell 20 percent to 5.9 billion euros from a year earlier, while phone volumes tumbled 30 percent on the previous quarter.