Apple supplier Samsung Display has decided to end all of its production of liquid crystal display (LCD) panels in South Korea and China by end of this year.

Samsung Display, a unit of South Korean tech giant Samsung Electronics, said in October that it suspended one of its two LCD production lines at home amid falling demand for LCD panels and a supply glut.

“We will supply LCD orders to our customers by end of this year without any issues,” the company said in a statement.

Samsung Display plans to invest 13.1 trillion won or $11 billion on facilities and research by 2025.

Samsung plans to begin operation of its newly upgraded “quantum dot” line from 2021 with a monthly capacity of 30,000 sheets.

It launched in early September a voluntary redundancy program for employees at its large display business department in South Korea, Reuters reported earlier.

Samsung Display plans to set up a factory in India with a $500 million investment as parent Samsung Electronics seeks to expand smartphone production there.

Samsung Electronics started making smartphones in Noida on the outskirts of the capital New Delhi in 2018. Last year, Samsung stopped production in China where it had to contend with competition from domestic rivals. 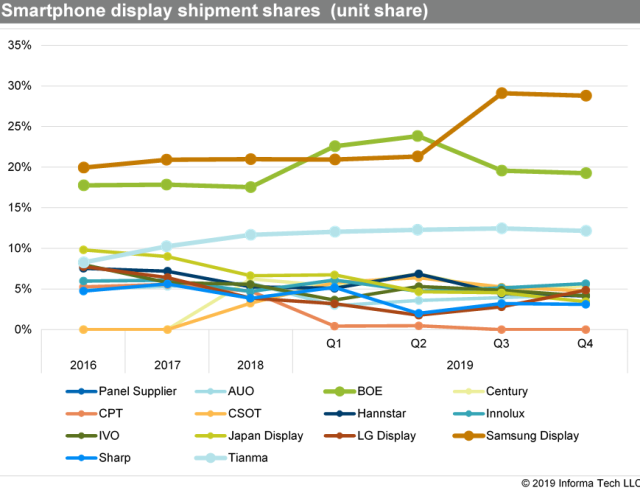 Samsung Display has reclaimed the top position in the smartphone display business in the third quarter of 2019. Samsung Display capitalized on demand for active matrix organic light emitting displays (AMOLEDs), according to IHS Markit | Technology.

The South Korean tech giant accounted for 29 percent of smartphone display shipments in the third quarter, a major leap from its 21.3 percent share during the second quarter, according to IHS Markit | Technology.

“All the major smartphone brands — including Samsung, Apple, Huawei, Oppo, Vivo and Xiaomi — have adopted AMOLED technology in their high-end models in 2019,” said David Hsieh, senior director at IHS Markit. 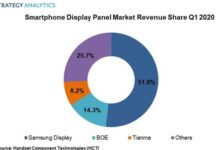