Smartphone manufacturing is expected to drop 3.3 percent to 1.41 billion units in 2019 due to weakening demand, according to TrendForce. 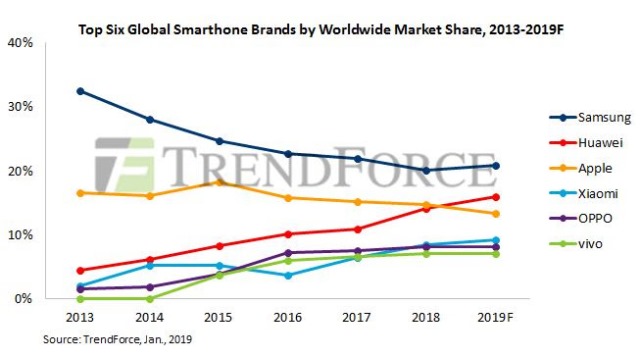 Global smartphone buyers are not looking for new phones as replacement because of lack of innovative features available with the latest phones.

If the demand outlook becomes worse, together with uncertainties and impacts from the U.S.-China trade war, the decline in global smartphone production may reach 5 percent in 2019, the report said.

Samsung would remain the smartphone market leader in 2019, while Huawei is expected to overtake Apple to become the world’s second largest smartphone maker.

Huawei has increased its production of smartphones by 30 percent to 205 million units in 2018. Huawei will produce 225 million smartphones in 2019 for 16 percent share, overtaking Apple.

Apple’s manufacturing of iPhones fell declined 3 percent in 2018. Apple’s shipment in the Chinese market last year was 10 million units less than in 2017, due to the ban on the sale of some iPhone models and the high pricing of the new iPhones.

Apple’s production of iPhones for 2019 would decrease to 189 million units with the market share of 13 percent from 15 percent in 2018. If the tension in US-China trade becomes worse this year, Apple’s production volume may decline further.

Xiaomi, OPPO, and Vivo would retain the fourth, fifth and sixth position respectively in the global smartphone brand ranking for 2019, the same as 2018.

Xiaomi has manufactured 123 million smartphones in 2018, clocking 32 percent growth. The smartphone production of Xiaomi is expected to touch 129 million units in 2019.

OPPO, which manufactured 120 million smartphones in 2018, aims to keep the volume flat in 2019, with an estimated market share of 8 percent.

Vivo produced 104 million smartphones in 2018. Vivo will be manufacturing less than 100 million in 2019, representing a global market share of 7 percent.