Smartphone shipments in North America dropped 18 percent in Q1 2019 to a five-year low of 36.4 million units. 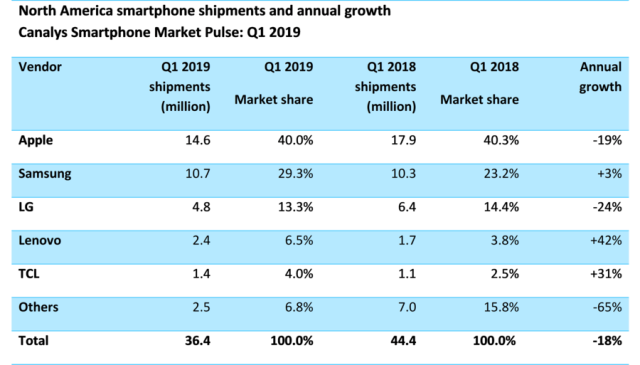 The drop from a record high of 44.4 million in Q1 2018 is due to poor performance by Apple and the absence of ZTE from China, according to a Canalys research.

Apple with 40 percent market share, Samsung with 29.3 percent share, LG Electronics with 13.3 percent, Lenovo with 6.5 percent and TCL with 1.4 percent share are the smartphone leaders in North America.

Samsung enhanced its share to 29 percent against 23 percent in Q1 2018. Samsung scheduled an earlier launch date for the S10 series, and more than doubled shipments over the S9 series in their respective launch quarters. 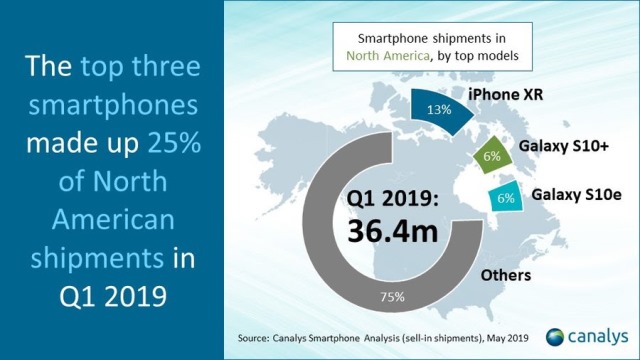 Samsung benefited from carrier promotions, which used the Galaxy S10e as an incentive. It will face pressure as vendors such as OnePlus, Google and ZTE attempts to re-establish their presence. OnePlus will add more features, Google will reach more carriers and ZTE will have low-end phones.

Apple was helped by carrier and retail discounts on older models, such as the iPhone 6S and iPhone 7, as well as the growing use of trade-in promotions, according to Canalys Research Analyst Vincent Thielke.

The unlocked smartphones market in the United States declined 12 percent in Q1 2019, said a report from Strategy Analytics. BLU has regained the top position, followed by Lenovo, Samsung, LG, Apple, Google and TCL in the US unlocked smartphone market during Q1 2019.