Global smartphone shipments will decline 1.9 percent in 2019 despite 5G launches, according to the latest IDC report. 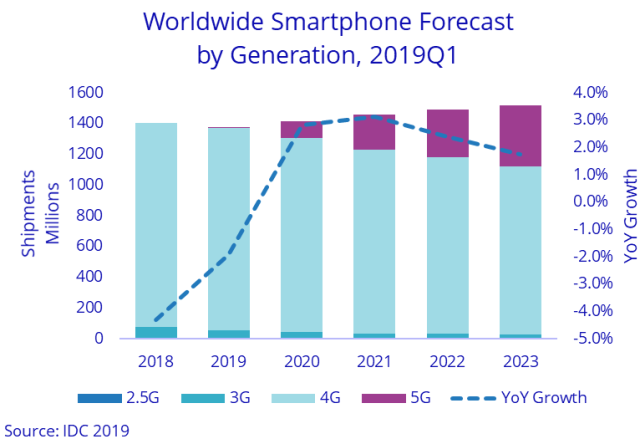 This will mark the third consecutive year of decline in the global smartphone market driven by highly saturated markets in developed countries and slower churn in some developing economies.

The report did not mention about the issues faced by Huawei in several smartphone markets. Huawei is unable to source smartphone and network components from US-based technology companies as the Chinese phone companies is black listed by the United States.

Smartphone shipments will be down 5.5 percent in the first half of 2019 and will grow 1.4 percent in the second half of the year — driven by 5G acceleration, a growing selection of lower-priced premium handsets, and on-going uplift from markets like India.

“Even without the trade tensions between the U.S. and China, the smartphone market has some important challenges that need to be resolved before we see growth again,” said Ryan Reith, program vice president with IDC’s Worldwide Mobile Device Trackers.

Smartphone shipments in China will dip 5 percent in 2019. China’s smartphone market is expected to achieve flat growth in H1 2020 and return to positive territory in H2 2020 as heavy 5G marketing inclusive of device subsidies is imminent.

“With 5G on the horizon as well as some interesting new form factors, it will be critical for vendors to continue to bring affordable products to market to reinvigorate the market’s growth,” Sangeetika Srivastava, senior research analyst with IDC’s Worldwide Mobile Device Trackers, said.

Android’s smartphone share will increase slightly to 86.7 percent in 2019 from 85.1 percent in 2018 mostly due to launches of several new models, including 5G devices announced or coming to market in H2 2019.

Apple iPhone shipments volumes are expected to drop 12.1 percent to 183.5 million impacting the growth of iOS.