Worldwide smartphone shipments declined 8.7 percent year over year in the second quarter of 2022 (2Q22), according to IDC. 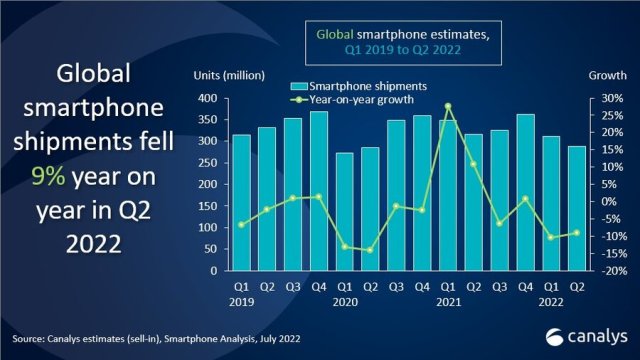 This marks the fourth consecutive quarter of decline for the smartphone market as shipments fell to 286.0 million units in the quarter, about 3.5 percent lower than forecast, IDC said.

“The global smartphone market is suffering a second period of falling shipments after a brief recovery in 2021, and the sudden drop in demand is hitting the leading vendors,” said Canalys Research Analyst Runar Bjorhovde.

“Supply chain shortages are no longer the most pressing issue as component orders are being cut rapidly and suppliers have started to be concerned about oversupply,” said Toby Zhu, Canalys Analyst.

“It has resulted in price cuts for key components, which reduces costs for vendors. Vendors could use the extra savings to improve the product competitiveness of new launches in the second half of the year. The oversupply situation is demanding more of vendors’ planning capabilities than the shortage period.”

“Phone OEMs have cut back orders for the rest of the year with Chinese vendors making the biggest cuts as their largest market continues to struggle. Though we do expect demand to start picking up in some regions towards the end of the year, the outlook for the 2022 smartphone market will definitely be revised down a few points,” Nabila Popal research director with IDC’s Worldwide Tracker team said.