The latest IDC report and the report from Strategy Analytics indicate that global smartphone shipments grew substantially during the second quarter of 2021. 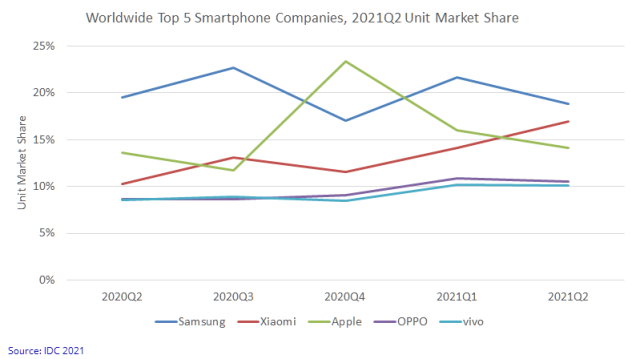 Samsung maintained the #1 position with 18.2 percent share. Samsung has registered the lowest annual growth rate at 5.4 percent. The intensified competition from Chinese vendors and the supply constrain both impacted the performance of Samsung.

Xiaomi jumped into the top 2 list for the first time ever. Xiaomi shipped 52.8 million smartphones in Q2 2021 for 16.8 percent share. Xiaomi seized the opportunities from the withdrawal of LG in Latin America, and Huawei’s fallout in Europe region.

Apple shipped 47.4 million units of iPhones and captured 15.1 percent market share. Emerging markets are playing an increasing role in Apple’s global map. China has overtaken the USA being the largest single market for Apple iPhone, for the first time ever.

Smartphone shipment volumes grew 13.2 percent to 313.2 million. Every region contributed to the overall growth except for China, where the lack of flagship product launches, poor demand, and the decline of the Huawei brand pulled the market down 10 percent compared to the second quarter of 2020.

Xiaomi moved into the second position for the first time, moving Apple to third.

In the markets where Huawei and LG are strongest (China and the USA, respectively), companies face different chances of gaining that share. In the United States, Motorola, TCL, and OnePlus experienced year-over-year gains beyond what they have seen in recent years due to LG’s departure. In China, Xiaomi, OPPO, vivo, and Apple gained from Huawei’s decline.