The latest IDC report indicated that Xiaomi has increased its smartphone market share in India in 2018, while Samsung and OPPO lost share. 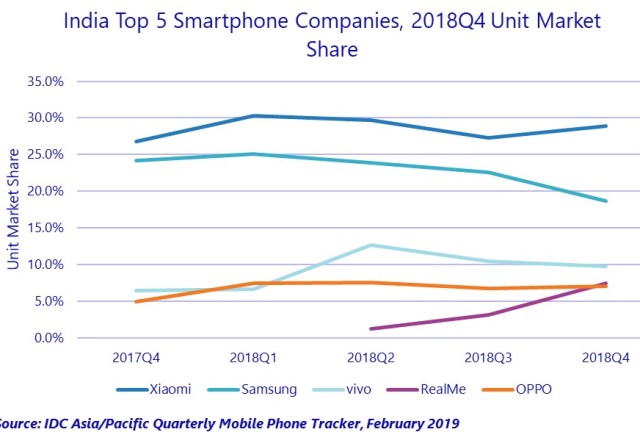 Huawei is the second largest smartphone brand globally. It is surprising to see that Huawei is unable to make any strong presence in the Indian smartphone space. Apple is also not in the top five smartphone list.

The smartphone market in Q4 2018 declined 15.1 percent quarter on quarter due to channel inventory and rose 19.5 percent year on year driven by multiple rounds of sales by online sales beyond the festive Diwali period lasting into December.

“Amongst the big highlights of 2018 were the online-focused brands that drove the share of the online channel to an all-time high of 38.4 percent in 2018 and a whopping 42.2 percent in Q4 2018,” said Upasana Joshi, associate research manager, Client Devices, IDC India.

Shipments of the online-exclusive portfolios of Xiaomi, Honor, Realme, Asus, OnePlus etc. resulting in a year-on-year growth of 47.3 percent in Q4 2018 for the online channel in India, said IDC.

The offline channel achieved 6.7 percent annual growth in 2018 and 5 percent quarter on quarter growth in Q4 2018.

The offline retail channel was unable to keep pace with the deep discounts and go-to-market initiatives from the e-commerce companies.

2018 witnessed duty hikes on mobile phone components, coupled with weakened rupee added to the challenges of the long tail of brands outside the Top 5.

The overall smartphone average selling price remained flat in 2018 at $158.

OnePlus has emerged as the leader in $500-$700 segment on the back of the OnePlus 6 and the newly-launched OnePlus 6T.

Samsung surpassed Apple in the super premium segment of $700+ for the top position with its Galaxy S9 series.

This was primarily driven by Jio Phone shipments, contributing to 36.1 percent of overall feature phone shipments. The 2G/2.5G market declined 23 in 2018 owing to high demand for 4G enabled feature phones in the market. 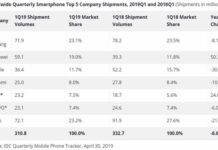 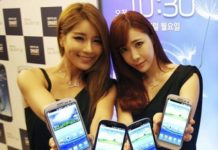 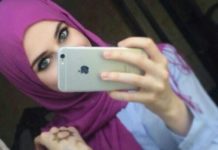