Research agency IDC said Xiaomi has retained its lead in the India smartphone market in the first quarter of 2018 — pushing Samsung. 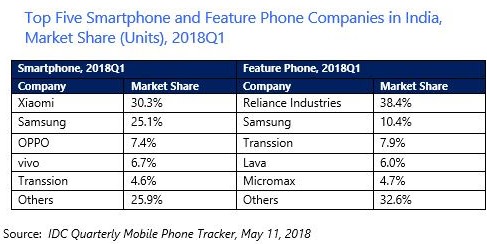 Samsung continues to take the second position with 25.1 percent share.

The gap between Xiaomi and Samsung is growing. Xiaomi’s India smartphone market share has reached more than 30 percent in the first quarter of 2018.

Samsung has remained at the second spot in smartphone ranking with flat annual growth. The two pronged approach with the focus on low-to-mid range J series and the flagships Galaxy S9 series along with Galaxy S8 series and Note 8 in the premium segment drove shipments for the Korean vendor.

Xiaomi has maintained its lead in the market for second quarter in a row with expansion in the offline channel and popularity of its models such as Redmi 5A and Redmi Note 5.

Xiaomi increased its share of total online shipments from 32 percent a year ago to 53 percent. “Xiaomi is in a unique position with a diversified channel approach and strong demand in each of the channels,” Jaipal Singh, senior market analyst at IDC India.

OPPO moved to third position from fifth in the last quarter. OPPO achieved growth thanks to the channel realignment to focus on channel partners primarily with high sales contribution in India. OPPO, following the footsteps of Xiaomi, conducted its first flash sale exclusive on Flipkart ahead of F7 launch. The smartphone maker is also expected to launch its new online exclusive series under the brand Realme.

vivo slipped to fourth position as its shipments declined 29.4 percent.

Upasana Joshi, senior market analyst at IDC India, said the increase in import duty on PCBs, camera modules and connectors by the Indian government, puts cost pressure on the smartphone companies, till such time that they set up lines for CKD (Complete Knock Down) type of manufacturing to reduce this impact.

Retailers and distributors in the offline channel fear a cut in their trade commissions to absorb the impact of price hikes as phone companies are facing margin pressure due to increase in custom duty and raw material prices.

India smartphone market shipments have reached 30 million units with an annual growth of 11 percent in Q1 2018 as online sales have become a strong focus area for China based firms. The smartphone market in India remained almost flat compared to the previous quarter.

The 4G feature phone market grew at more than 50 percent quarter-on-quarter, driven by Jio Phone. The mobile operator disrupted the market by introducing data plans at INR 49 in the initial weeks of the quarter acting as catalyst for growth.