Worldwide smart connected device value is expected to be $622.4 billion in 2013, of which $423.1 billion will come from the sub-$350 smartphone and sub-$350 tablet segments collectively.

In terms of shipments of smart connected devices, the growth will be 27.8 percent this year. In 2012, shipment growth was 30.3 percent.

The growth in 2013 will be driven by tablet and smartphone shipments, while the PC outlook has been lowered by 10 percent in 2013.

Tablet shipments will surpass total PC shipments (desktop plus portable PCs) in the fourth quarter of 2013. 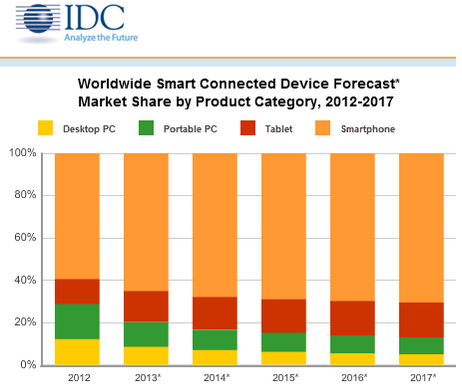 Smartphones will continue to ship in high volumes, surpassing 1.4 billion units in 2015 and accounting for 69 percent of all smart connected device shipments worldwide.

IDC expects the lower-cost devices to drive interest worldwide and help to spark uptake among first-time buyers in commercial sectors like education.

A new round of device cannibalization is also expected to kick in, but this time with large-screen (5+ inch) smartphones beginning to impact the smaller (7-8 inch) tablet market.

Over the next 12-18 months, the larger smartphones or phablets will start to eat into the smaller-size tablet market, contributing to a slower growth rate for tablets.

IDC says the worldwide smart connected device space shipments surpass 2 billion units by the end of 2015 with a market value of $735.1 billion.

In terms of device mix, total PC shipments accounted for 28.7 percent of the smart connected device market in 2012 while tablets accounted for 11.8 percent and smartphones for 59.5 percent.

By 2017, total PCs are expected to drop to 13 percent, while tablets and smartphones will contribute 16.5 percent and 70.5 percent respectively to the overall market. The shift in demand from the more expensive PC category to more reasonably priced smartphones and tablets will drive the average selling price (ASP) for the collective market from $462 in 2012 to $323 in 2017.