The growth will be driven primarily by complex accessories such as Fitbit devices, Jawbone’s UP bracelet, and Nike+ FuelBand.

IDC said their value proposition has yet to be completely clarified.

Smart wearables like Google Glass will not reach one million mark till 2016.

In October 2013, ABI Research said that more than 13 million wearable devices with embedded wireless connectivity will be integrated into wellness plans offered by businesses over the next five years.

In February 2014, Canalys said Samsung is leading the smart wearable band market in the second half of 2013 with 54 percent.

Sony has a market share of 19 percent in smart wearable band market. Pebble is in the third position with 16 percent share in H2.

Canalys says Fitbit became the new leader of the wearable band market, following the launch of its Flex and Force bands in May and October 2013 respectively. It dominated the market for basic bands, with over 50 percent market share in the second half.

IDC today said complex accessories will lead the wearables market through 2018 as users continue to embrace their simplicity and low price points. These devices are designed to operate partially independent of any other device, but fully operate when connected with IP-capable devices such as a smartphone, tablet, or a PC.

Smart accessories will surpass complex accessory shipments by 2018. Smart accessory market will continue to mature as users better understand and accept the value proposition and vendors refine their offerings.

IDC said smart wearable vendors must convince users to shift to a new user experience while offering them a robust selection of third-party applications.

Meanwhile, IDC ConsumerScape 360° survey of more than 50,000 consumers in 26 countries rated Samsung as the most trusted brand for wearables, ahead of Apple, Sony, and Google.

In February 2014, ABI Research said heart rate and activity monitors will outpace shipments of smart watches and glasses for some years to come and they will also provide the essential foundation for the development of the broader wearable market. Over the next five years wearable devices will increasingly move into healthcare services as well. 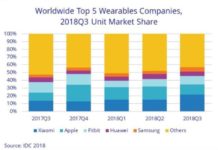 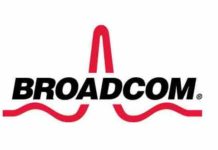