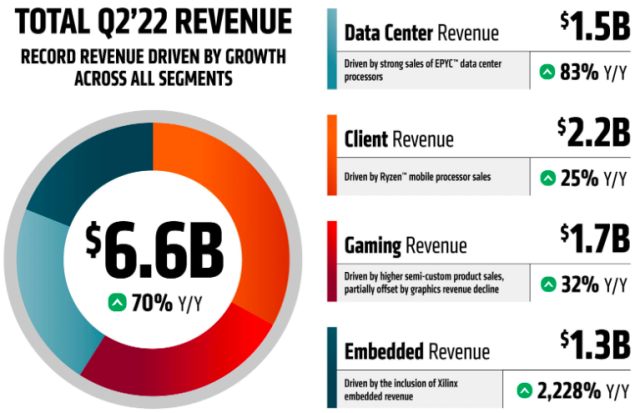 “After the challenging quarter that Intel had, a lot of eyes were closely watching to see what AMD did and, overall, the numbers were solid,” said Bob O’Donnell, chief analyst at TECHnalysis Research. “The issue is the market was looking for a better forecast, but it’s clear that the company sees a challenging market going forward.”

Inflation and the reopening of offices and schools have led people to spend less on personal computers (PCs) than they did during lockdowns, hurting companies like AMD, which is among the largest suppliers of central processing units and graphics processing units chipsets.

Chipmakers also under pressure from a spate of COVID curbs in China, an important PC market, and the Ukraine war, which have worsened supply-chain snarls and dragged demand further. Global shipments of PCs are expected to drop 9.5 percent this year, according to IT research firm Gartner.

AMD CEO Lisa Su told analysts on earnings calls that in her interactions with customers, the cloud business continued to be strong. “We’re continuing to ramp new cloud instances … we see that continuing into the second half of the year.”

YipitData research director Nathaniel Harmon said AMD has been gaining market share in the data center and cloud market at Intel’s expense, while Intel has been losing 1-2 percentage points of share each quarter since the first quarter of 2019.

AMD is coping with a slowing PC market. Su told analysts that AMD revised its outlook on the PC market for this year to drop by the mid-teens percent from previous projections of a high single digit percent drop. Su said AMD was focusing on the higher end PC market.

The company expects revenue of $6.7 billion, plus or minus $200 million, for the current quarter..

AMD expanded its full-year forecast to a range of $26 billion to $26.6 billion, compared to about $26.3 billion earlier.