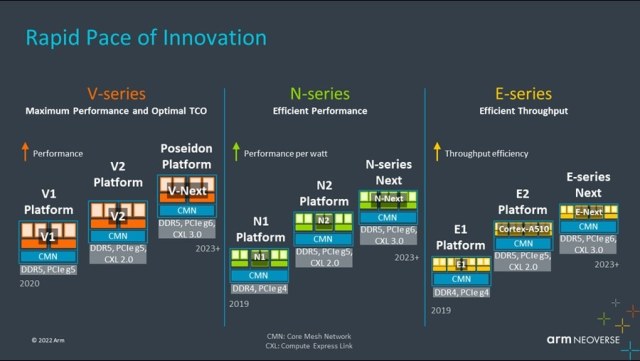 Arm creates underlying intellectual property that other firms such as Qualcomm or Apple then license to create their own processor chips. Arm’s technology powers most mobile phones, but it has been making a big push into data center processors where Intel and Advanced Micro Devices (AMD) have dominated.

“Our partners are taking this and building very efficient solutions to target the problem spaces that they’re going after,” Dermot O’Driscoll, Arm’s vice president for product solutions, said during a Q&A session about the new product. “So we do expect to see some pretty compelling data points going from V1 to V2.”

Arm said all major public clouds are offering instances based on Neoverse.

Arm said it is providing leading performance at reduced power, greater throughput, which results in critical TCO benefits — in the 5G RAN and wireless infrastructure.

“This enables partners to customize products for applications and use cases ranging from small cells, macro cells, to private networks, Chris Bergey, SVP and GM, Infrastructure Line of Business, Arm, said in a blog post.