Semiconductor equipment investments for front end fabs are expected to reach nearly $100 billion in 2022 to meet demand for electronics after topping a projected $90 billion this year, SEMI highlighted today in its World Fab Forecast report. 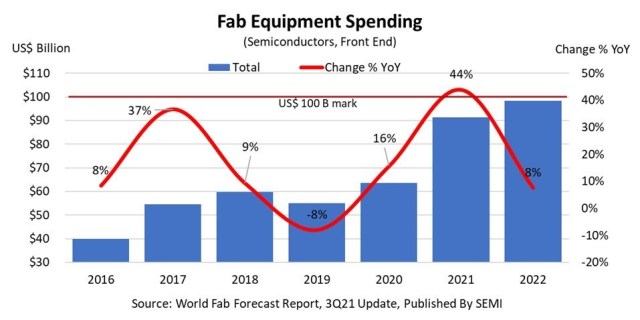 The foundry sector will account for the bulk of fab equipment investments in 2022, with more than $44 billion in spending, followed by the memory sector at over $38 billion.  DRAM and NAND show large increases in 2022 with jumps in spending to $17 billion and $21 billion, respectively. Micro/MPU investments will reach approximately $9 billion, discrete/power $3 billion, analog $2 billion, and other devices approximately $2 billion next year.