Intel has revealed that innovations at Intel Products Vietnam (IPV), the largest assembly factory with 2,800 employees and investment of $1.5 billion, is helping the semiconductor giant in reducing supply chain issues. 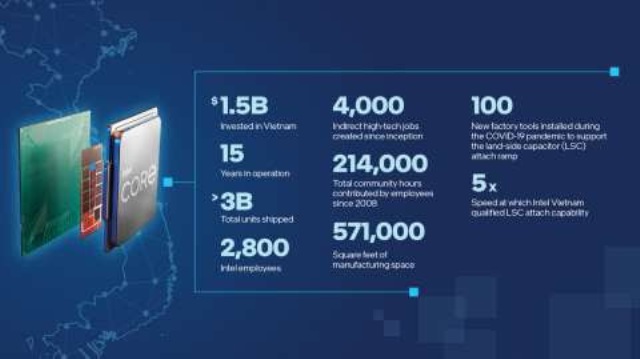 Intel has delivered millions of additional units of chip production over the past year – meeting customer demand while the industry struggled to weather a shortage of this critical component. This was due to an innovative approach to processing Ajinomoto build-up film (ABF) substrates in its assembly and test factory.

“This initiative is a terrific example of how integrated manufacturing is foundational to Intel’s success. Our global factory network and supplier ecosystem directly enable a more adaptable and resilient supply of products,” Keyvan Esfarjani, Intel executive vice president and chief global operations officer, said in a news statement.

“Over the past year, as substrates were constrained across the industry, our ability to leverage internal capacity created more than $2 billion in revenue upside for Intel, allowing us to respond with agility to meet dynamic customer demand.”

A computer chip is mounted between a substrate and a heat spreader to form a completed processor. This package — composed of about 10 layers of fiberglass — protects the chip and forms electrical connections between the processor and the circuit board in a computer. A silicon chip must be placed within a few microns to line up with electrical connections, allowing signals to flow from the motherboard through the substrate to the chip and back again.

Among the key parts of substrates are capacitors, devices that can store an electric charge. Capacitors reduce noise and impedance and maintain a constant voltage to the chip. For years, Intel has attached certain capacitors on one side of the substrate and relied on substrate suppliers to attach them on the other side.

Now, Intel is attaching these components to both sides of the substrate in its Vietnam Assembly and Test (VNAT) factory. VNAT team dedicated factory floor space, purchased additional tools and modified existing ones to prepare for high-volume production, which began in May 2021.

“This is the ultimate demonstration of why integrated manufacturing is a benefit to Intel and our customers,” said Kim Huat Ooi, vice president and general manager of Intel Products Vietnam. “By bringing this capability in-house, we are able to complete chip assembly more than 80 percent faster, while at the same time freeing up the substrate suppliers who are constrained on capacity.”