The smartphone applications processor (AP) market rose 17 percent to $8.3 billion in the third quarter of 2021, according to Strategy Analytics report. 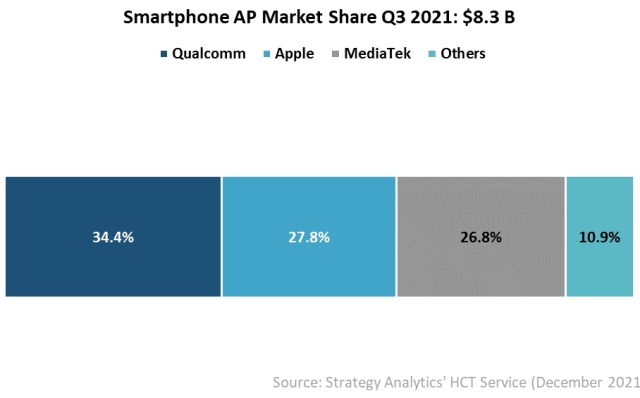 Qualcomm maintained its smartphone AP leadership with a 34 percent revenue share, followed by Apple with 28 percent and MediaTek with 27 percent.

MediaTek exited the first nine months of 2021 with 26-million-unit lead over Qualcomm. Consequently, MediaTek is on track to become the leading smartphone AP vendor in unit terms for the first time on an annual basis in 2021.

Qualcomm deprioritised mid-range and low-end 4G APs to focus on premium and high tier APs to make the best use of available foundry capacity. As a result, MediaTek gained volume share in 4G APs with its Helio A/G/P lineup.

Qualcomm’s premium tier AP Snapdragon 888/888+ was the top-selling Android AP during the quarter.

Smartphone APs manufactured in 7 nm and below process technologies accounted for 47 percent of total smartphone AP shipments in Q3 2021.

Qualcomm and MediaTek benefited from HiSilicon’s forced exit while Unisoc saw strong growth in its 3G and 4G AP shipments. AP vendors will to focus more on 5G in 2022 to maximise their revenue and profit, Sravan Kundojjala, author of the report and Associate Directorof Handset Component Technologies service at Strategy Analytics, said.