The global smartphone memory market revenue dropped to touch $11.5 billion in Q1 2022, according to Strategy Analytics. 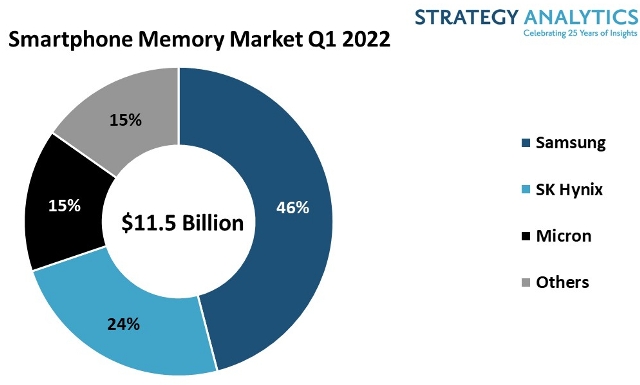 Samsung Memory, SK Hynix and Micron faced a drop in demand in smartphone memory market due to the weakness in the smartphone market.

Samsung has retained the top spot in the smartphone memory market (DRAM & NAND) followed by SK Hynix and Micron in Q1 2022.

Samsung has a revenue share of 39 percent in NAND flash market. SK Hynix and Kioxia have 23 percent and 20 percent share respectively in the smartphone NAND market in Q1 2022. 128GB NAND capacity share has now reached 45 percent owing to the expansion of UFS 3.1 and UFS 2.2 NAND products in smartphones.

The smartphone DRAM memory chip segment revenues declined 7 percent as OEM demand weakened due to seasonality and disruption in the customer supply chain.

Jeffrey Mathews, Senior Analyst at Strategy Analytics, said: “The Smartphone Memory market fell annually due to the seasonal slowdown in the end-market combined with the pandemic-induced disruption in customer supply chains in Q1 2022. 5G momentum drove the shipment of memory products with higher specifications, leading to an increase in NAND and DRAM content in mid and high-tier smartphones.

Stephen Entwistle, Vice President of the Strategic Technologies Practice at Strategy Analytics, said: “Memory vendors to see increased opportunities in the growing 5G smartphone market with the expansion of UFS-based LPDDR5 Multi-Chip Package (uMCP5) memory products and the introduction of LPDDR5X DRAM products during the year.”