We’ve heard about the promise of 5G for years – how it will be faster and more efficient – but it wasn’t until 2019 that we saw the first, small signs of rollout around the world.

Since then, Vietnam’s Viettel is looking to conduct 5G trials in Ho Chi Minh and Hanoi, while Singapore confirmed that 5G services will be available by 2020.

While we wait for wider 5G adoption including the introduction of more 5G-capable devices in rest of Asia Pacific region, we believe 2020 will be the kickoff to a more connected future.

Consumers will continue to hear about 5G and the benefits it will offer including gaming and augmented reality, which will lead the drive for low latency. But gaming, augmented reality and even video – which is predicted to be 82 percent of all IP traffic by 2020 – are not the killer apps that will drive the consumer need for new experiences and the need for 5G. Operators will not wait for the killer app and will be busy in 2020 rolling out, densifying, and powering the network in a variety of bands while working on driving the standards and technology.

Operators around the world have designated mid-band (mostly 3.5GHz) as a primary band for 5G, however the U.S. operators do not have this option, and thus are using both current lower frequency bands and mmWave frequencies (above 24 GHz).

Operators need efficiency in terms of cost per bit per area, which dictates how, where, and what bands they are going to deploy. In other words, operators will decide if they use high band, then the cost per bit goes down, but the area decreases so they need to deploy more cells which drives up cost. When using mid-band or low band spectrum, which enables them to lower cost as they don’t have to deploy as many cells to cover the same area, the cost per bit goes up as the bandwidth of the radios is significantly less. The key will be an optimization equation driving high frequency in more dense areas, and lower frequency in less dense areas.

Which bands are owned and deployed by an operator will dictate the areas of coverage, reach and speed. What we will end up with is coverage kings, capacity kings, and fixed wireless. Coverage kings will use their spectrum and chosen technology to cover a large geographic area; for example Australia, where most of the population is on the coasts but the interior of the country still needs coverage.

Capacity kings will focus on cities like New York, Paris and London, and other densely populated areas relying on technologies such as small cells, to deliver speed and low latency services to consumers, businesses and connected devices. This is critical for nations looking to move towards smarter cities (like Singapore), as 5G will be ideal to manage the complex and high-bandwidth data required to support the network infrastructure that thousands of IoT devices are built on. Fixed wireless will focus on delivering the service with the reach to provide broadband connectivity to low population density users economically.

More spectrum will become available in various regions of the world through auctions or allocation with every passing year. For example, Hong Kong mobile carriers each acquired 50 megahertz of the 3.5GHz spectrum via auction recently, with HKT, the island state’s largest operator, saying they will launch commercial 5G services in the second quarter of 2020. Spectrum availability in the 3.3 – 3.8 GHz range for 5G allows for both capacity (in terms of the amount of data traffic), and coverage (the distance that radio signals can travel); this is crucial for the delivery of enhanced mobile broadband services.

In 2020 we will see the launch of shared spectrum and the potential to prove it can work. Over in the United States, the Citizens Broadband Radio Service (CBRS) will enter full commercial deployment and utilize a spectrum access system to allocate spectrum. Other regions will watch and see if this experiment works and make adjustments to implement in other parts of the world.

In addition to licensed and shared spectrum, 2020 is also the year that Wi-Fi 6 goes mainstream. This is echoed in a recent cross-industry survey conducted by the Wireless Broadband Alliance (WBA) showed that a staggering 90 percent of respondents are already planning to deploy Wi-Fi 6, with 66 percent saying they plan to deploy the next iteration of Wi-Fi before the end of 2020.

There is a concerted push to increase available spectrum for Wi-Fi in the 6GHz band, as well as to utilize all spectrum to meet consumers’ needs, both licensed and unlicensed. Although Statista predicts the global number of 5G connections to be 1.1 billion by 2025, Wi-Fi 6 is an option for businesses and densely populated areas to offer wireless coverage.

Late last year, Wire and Wireless (Wi2) in Japan announced the first field tests of Wi-Fi 6 in retail environments across Japan, and will eventually be rolled out to other public venues such as restaurants which see higher user density who can potentially benefit from the high-speed connectivity and lower latency.

Open standards continue to be a big topic of discussion and we see 2020 as the beginning of a three-year process that will prove if open standards will be beneficial for the wireless operator. The O-RAN Alliance is an organization that has “committed to evolving radio access networks around the world.” Their vision is to virtualize various network elements, white box hardware and standardized interfaces throughout the network. Although the organization is young – founded in 2018 – it already has more than 120 member companies working toward openness and intelligence. We believe that 2020 will see agreement on key aspects of O-RAN speeding up 5G network deployments.

Many wireless operators have also started 5G network deployments with small trials of massive MIMO (multiple-input and multiple-output) technology. As networks are brought online in 2020, the amount of data required, along with the cost of power, backhaul and site acquisition, will dictate if and when massive MIMO plays out in network deployments. If more capacity is needed, 2020 could see an increase in massive MIMO deployments however, as efficiency goes up with massive MIMO, complexity and cost also goes up.

TDD (time division duplex) has been the technology used for Wi-Fi, while FDD (Frequency division duplex) has been used for most of the cellular world. With the introduction of higher frequency licensed spectrum, TDD is now going mainstream with 5G. This will bring new challenges and benefits and a different type of complexity as it is integrated in with the traditional TDD bands. The additional of this TDD spectrum however, will enable wireless networks to compete with wired networks.

Rollin’ out the networks

We see 2020 as a major 5G coverage and capacity build year. Not only will 5G require touching the macro-sites, but will require densification of metro cells and beefing up in-buildings systems.

Although it is still early days, data and processing is starting to move from the core toward the edge to remove bottlenecks. We will see more of this happen as the network virtualizes. As the metro layer of the network becomes more important, getting power to these locations will be critical from a cost and time perspective. CommScope has long talked about PBS – power, backhaul and site acquisition as the critical three for building a network and this is even more true for 5G.

5G has launched in places around the world, but it is only in its infancy. Network operators still have a lot of work to do to make this technology live up to its potential. We believe that 2020 will be the year that network operator put the pieces into place to deliver the 5G promise and we will watch as the lines between wireless and wireline continue to blur. 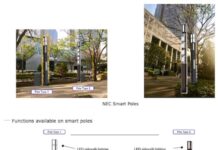