Dell’s Ethernet switch revenue is up by double-digit percentages from the year-ago 2nd quarter, driven in part by its acquisition of Force10.

Global Ethernet switch revenue reached $5 billion in 2Q12, up 9 percent from the previous quarter, and up 13 percent year-over-year.

Revenue for 1G ports, the largest segment of the Ethernet switch market, is up year-over-year in 2Q12, a positive sign for the overall switching market.

In the first quarter of 2012, Networking major Cisco, HP, Alcatel-Lucent, Juniper and Huawei are the top 5 Ethernet switch vendors based on revenue market share.

In the second quarter, negative economic news in the world didn’t keep Ethernet switch buyers from propelling the market past $5 billion.

Matthias Machowinski, directing analyst for enterprise networks and video at Infonetics Research, said Sales in North America, the largest Ethernet switch market, did especially well, providing an important boost to the overall market. As usual, demand for 10G switches was strong, almost doubling from a year ago, and the 40G Ethernet market is taking off, as vendors round out their 40G solution portfolio.

Meanwhile, the global enterprise router market including high-end, mid-range, branch office, and low-end/SOHO routers eked out 2 percent growth in 2Q12 over the previous quarter, to $852 million, strained by weakness in Europe and in the public sector vertical.

Router sales in China, a major growth engine in 2011, are declining.

From the year-ago 2nd quarter, the overall enterprise router market is down 1 percent. 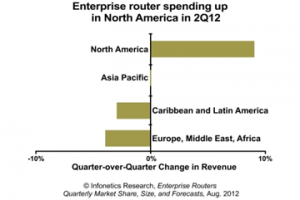