Mobile Core Network (MCN) revenues are projected to grow 8 percent per year over the next five years with the move to 5G Standalone (5G SA). 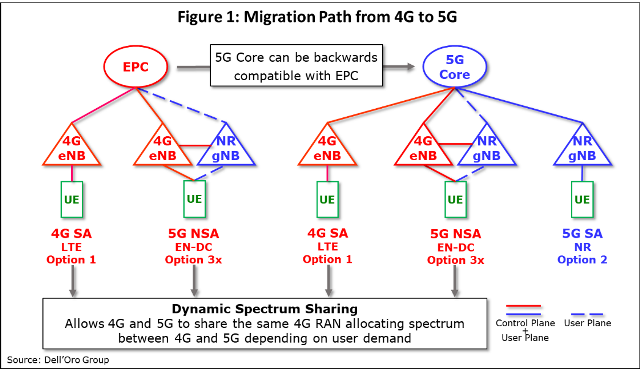 The MCN forecast for 2019 to 2024 prepared by research firm Dell’Oro Group includes 4G and 5G packet core, policy, and subscriber data management network functions, as well as the IMS Core.

Mobile operators are expected to launch 5G SA networks with 5G Cores in the second half of 2020. China and South Korea will lead the 5G SA market, followed by the US, Western Europe, and the Middle East.

4G MCN revenues are estimated to peak in 2022 and decline thereafter as the move to 5G SA accelerates.

The blog report from Dell’Oro Group highlighted the achievements of Huaweir and Ericsson in the 5G cores market. But did not mention about the impact on security related allegations on Huawei and the decision of some of the countries to exclude Huawei from 5G network.

Other leading telecom equipment manufacturers including Cisco, Nokia, Samsung and ZTE are poised to launch 5G Core networks with SPs in 2020 in China, South Korea, the U.S., Japan, Europe, and the Middle East. The most aggressive deployments will be in China and Korea, Dave Bolan said.

China Mobile awarded 5G Core contracts in April 2020 totalling $1.3 billion to three vendors: Huawei, ZTE, and Ericsson (in rank order). This will be the largest 5G Core network in the world.

There will be significant first-mover advantages for industries that start to deploy 5G technology to optimize manufacturing sites, factories, mines, ports, and warehouses, ABI Research said.

ABI Research estimates that more than 4.7 billion wireless modules will be deployed in smart manufacturing factories alone to enable more than USD 1 trillion in production value by 2030. A wired automotive factory would take one year to reconfigure for a new model year as compared with only two months for a wireless factory, ABI Research said.

Dell’Oro Group said technology is beginning to transition from virtual machine servers with virtual network functions, to bare-metal servers with container-based cloud-native network functions. The total cost of ownership savings is expected to be 30 percent over time, with the added benefit of reduced complexity.

The cumulative revenues for 5G MCN in the Asia Pacific will represent the largest regional share, led by service providers in China.

Over 70 SPs are providing 5G coverage with the 5G NSA architecture. The size of 5G SA deployments in 2020 is uncertain at this time and could impact the forecast. The transition from 5G NSA to 5G SA could affect the product mix between 4G and 5G network functions, though the overall size of the market would be the same.

AT&T and Verizon in the US have dedicated EPCs for public safety, and separate cores for MVNOs. China Mobile and China Unicom have awarded vendor contracts to build separate 5G Cores to serve both consumers and enterprises.