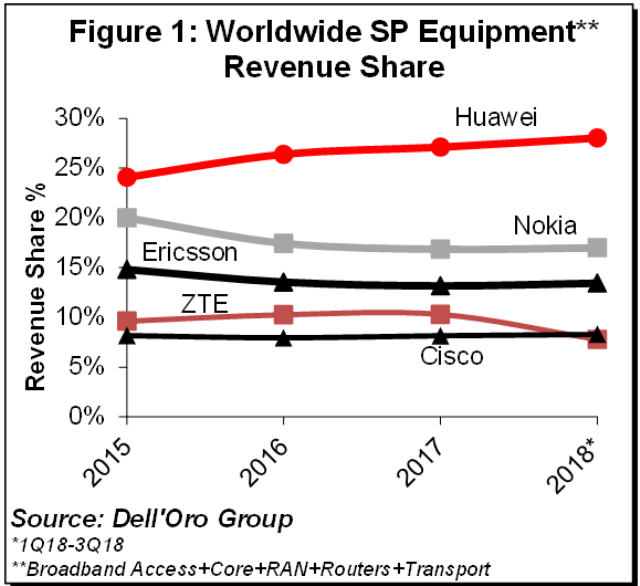 Combined these five companies accounted for about 75 percent of the worldwide service provider equipment market revenue.

US-based Cisco, the leader in enterprise networking market, moved to the fourth position beating ZTE, another supplier from China.

The report did not reveal the position of Samsung, one of the key suppliers in the 4G LTE equipment market in Asia and the US. Samsung had captured the fourth position from ZTE in Q2 2018 due to the China technology vendor’s inability to supply telecom equipment in the wake of penalty from the US.

The telecom network market share report assumes significance because Huawei is facing set back in several telecom markets. US, Australia, New Zealand and UK are trying to block their telecom operators from sourcing 5G network from Huawei.

Huawei’s revenue share improved in 2018 — up around four percentage points between 2015 and the first nine months of 2018.  Telecom equipment market share of Ericsson and Nokia declined one and three percentage points, respectively, during this period.

Huawei’s telecom equipment revenue is nearly as large as Nokia and Ericsson combined.

Huawei’s revenue share gains over the past four years have been most pronounced in the Core, Router, and Optical Transport Markets. The Dell’Oro Group report did not reveal its forecast on Huawei in the wake of the recent issues. BT Group, the largest telecom operator in UK, decided to drop Huawei from its core 5G network and remove the existing core 4G network.

Mounting pressure on the China-based telecom network maker, Huawei CFO Meng Wanzhou, daughter of Huawei’s founder, Ren Zhengfei, was arrested in Canada on December 1. She will appear in court on Friday and faces extradition to the United States, Reuters reported. 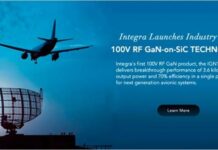 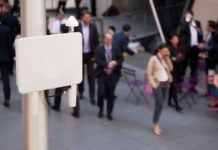