Huawei Technologies said it would continue to cut job of its employees and investment in Australia due to lack of business in the country, Reuters reported.

“In simple terms the 5G ban on Huawei has cost us 1,000 high-tech and high-wage jobs from the economy,” Jeremy Mitchell, Huawei’s chief corporate affairs officer for Australia, said in an emailed statement.

Huawei had already terminated A$100 million or $72.3 million of research and development investments in Australia since the 5G ban, Jeremy Mitchell said.

Huawei last month said it would end its sponsorship of an Australian rugby league club a year earlier than expected due to a downturn in its business.

Australia banned Huawei from supplying equipment for a 5G mobile network in 2018. The China-based Huawei denies that it is spying for China.

Huawei had originally struck a deal to lay undersea cables to bring high-speed internet to the Solomon Islands and PapuaNew Guinea, but in 2018 Australia decided to fund and build the infrastructure itself.

Vodafone Hutchison partnered with Nokia to roll out 5G services in Australia in the first half of 2020.

Australia earlier expanded its national security rules to exclude telecom equipment suppliers that it believes have ties to foreign governments, a move that disallowed Huawei from the country’s 5G rollout. 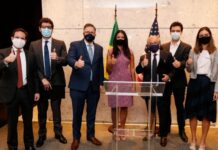