“The popularity of SMS and MMS has soared over the last decade, but carriers around the globe are just now beginning to seriously evaluate and deploy mobile messaging security solutions, forced by economic, regulatory, and attack conditions,” said Jeff Wilson, principal analyst for security at Infonetics Research.

Due to regulatory pressure, major carriers in a region are looking at SMS/MMS security solutions as a group and selecting a single vendor or technology, causing initial adoption to happen at once in that country or region, like Cloudmark/TeleDNA’s recent deployment in India.

Around 10 trillion SMS/MMS messages are generated annually, opening up new opportunities for spammers and hackers. 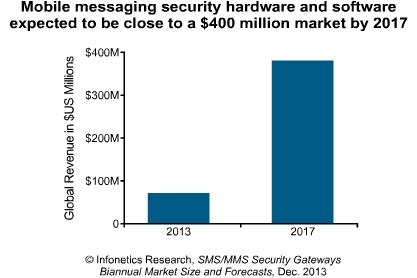 As a result, carriers are stepping up spending on security gateway solutions designed to combat SMS/MMS spam and threats.

For the full year 2013, the global SMS/MMS security gateway market is projected to reach $70 million, a 70 percent increase over 2012.

Cloudmark, which closed out 2013 particularly strong, and AdaptiveMobile are the current revenue leaders in the SMS/MMS security gateway space.

Worldwide, the SMS/MMS security gateway market is forecast by Infonetics to grow at a 56 percent compound annual growth rate (CAGR) from 2012 to 2017.