Reduced wireless infrastructure deployment activity negatively impacted Nokia Siemens, which will be 100 percent owned by Nokia after its split from Siemens.

Operating profit of Nokia Siemens in the second quarter of 2013 was €8 million against operating loss of €226 million. The broadband solution provider on Thursday said its operating margin increased to 0.3 percent from -6.8 percent.

The decrease of 17 percent was partially due to divestments of businesses not consistent with Nokia Siemens Networks strategic focus, as well as the exiting of certain customer contracts and countries.

The decrease in sales growth in Latin America was 9 percent.

Sales in both Greater China and Asia Pacific — India is a part of this region — decreased 24 percent. Nokia Siemens has posted lower sales in Japan. Constrained operator spending in anticipation of a technology shift to TD-LTE impacted its growth in China. 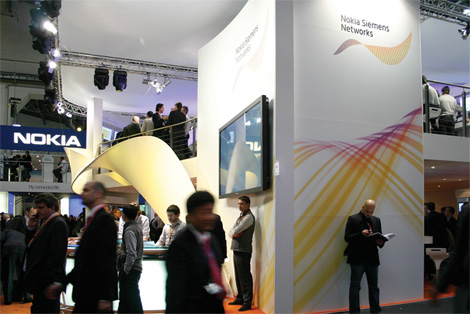 ABI Research says FDD networks will expand at a compound annual growth rate (CAGR) of 33 percent between 2012 and 2018 TDD networks will gain ground at a more rapid rate of 43 percent during this period but will only reach 52 percent population coverage due to fewer licensed markets currently.

There is good news for Nokia Siemens Networks. TD-LTE, the technology used by China Mobile, Bharti Airtel, Reliance Jio Infocomm for 4G, will reach 52 percent of population coverage by 2018. Nokia Siemens supplies to Airtel in India. It will be aggressive in China as well.

Nokia Siemens Networks expects its operating margin to be approximately 7 percent in the third quarter 2013.

Nokia Siemens Networks now targets to reduce its annualized operating expenses and production overheads by more than EUR 1.5 billion by the end of 2013, compared to the end of 2011.

Nokia Siemens Networks previous target was to reduce annualized operating expenses and production overheads by more than EUR 1 billion by the end of 2013, compared to the end of 2011.

The year 2013, according to industry experts, will mark the first year in which telecom equipment vendors will leverage LTE revenues to compensate for declining legacy technology revenues (GSM and CDMA), bolstered by the continuance of LTE deployments in North America and surging deployments in China and Latin America.

This prediction is becoming true as mobile broadband contributed to the sequential growth of Nokia Siemens Networks. The decrease in revenue growth in Q2 2013 comparing with Q1 2013 was 1 percent.

Before LTE revenues picked up in H2 2012, most Tier 1 telecom vendors saw infrastructure revenues slump compared to 2011, due to declining demand for GSM and CDMA equipment.

Analysts earlier said Nokia Siemens benefited from strong operator spending on LTE in Japan, South Korea and Canada, but the vendor largely sat out of the first phase of deployments in the United States, which prevented the company from nearing Ericsson’s market share. Several analysts are predicting that main portion of China Mobile’s 4G business will go to Huawei, ZTE, Samsung, etc.

LTE is not the only business for Nokia Siemens. Q3 will be prime for its turn around. Hope the market will rebound. Its outlook is positive for the telecom industry.