Ericsson’s RAN market share is double the revenue share of Nokia Siemens Networks, which is in #2 position.

Huawei and Alcatel-Lucent are in #3 and #4 positions in the global RAN market, Infonetics Research said. 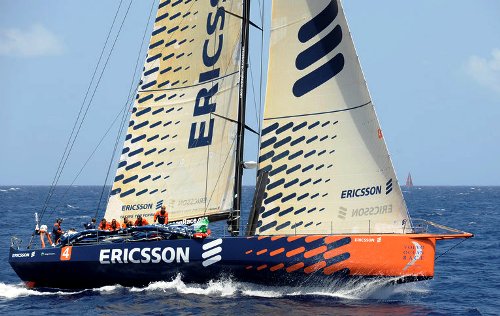 China Mobile has been working on Cloud RAN technology as early as 2010. It is expected that the new architecture will support multiple technologies, including GSM, TD-SCDMA and LTE TDD as well as LTE TDD-Advanced.

Infonetics says the worldwide 2G/3G/4G mobile infrastructure market reached $9.8 billion, down 9 percent sequentially, and down 2 percent year-over-year. The decrease in growth is despite another LTE ramp-up driven by North America and Europe.

LTE revenue was $2.7 billion in Q1, up 21 percent quarter-over-quarter and 108 percent year-over-year.

WiMAX dropped 42 percent in Q1 from the previous quarter. 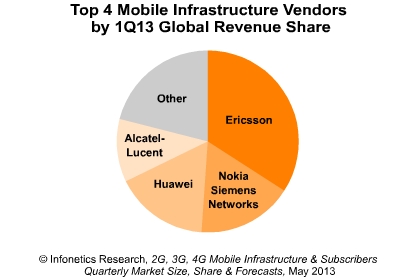 The BRIC countries (Brazil, Russia, India, China) are shaping up as a major engine for 2013.

Global mobile subscribers are forecast to reach 7 billion by 2017, with LTE subscribers making up just 8 percent of total subscribers.

Richard Webb, directing analyst for microwave and carrier WiFi at Infonetics, said: “LTE is the highlight of our 2G/3G/4G infrastructure forecast, growing at a 16 percent CAGR over the 5 years from 2012 to 2017.”