Ericsson’s new radio platform, Ericsson Radio System (ERS), accounted for about 84 percent of the shipments in the quarter against 61 percent in 2017.

Samsung is supplying Massive MIMO radios to SoftBank-owned Sprint and a sub 6 GHz macro to Verizon.

Huawei, Ericsson and Nokia accounted for 83 percent of the global RAN market in Q1 2018, down slightly from 84 percent share in 2017. 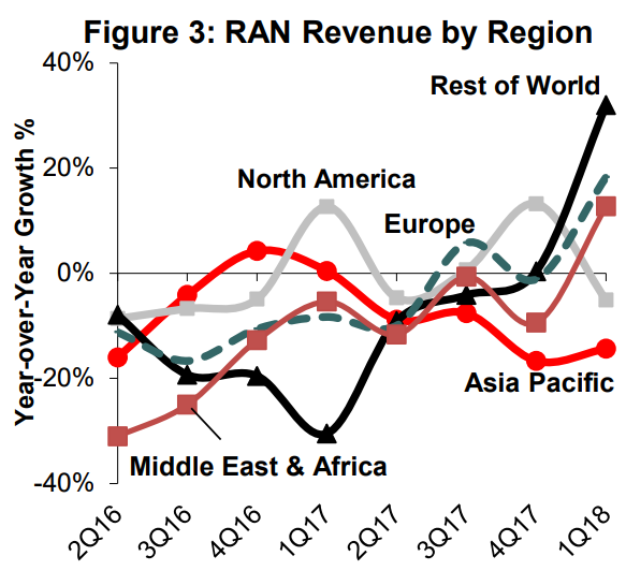 A report  published by ABI Research said the RAN base-station equipment market will grow at a CAGR of 5 percent to exceed $26 billion in 2023.

Spending on indoor equipment which represents 27 percent of this market will grow at a CAGR of 15.5 percent to represent a value of 42 percent of the total by 2023.

The Asia Pacific region, which includes some of the largest and growing RAN markets in the world, will continue to dominate the market with a share of 58 percent of the market, with North America and Europe ranking a distant second and third respectively.

Sales of infrastructure equipment in the North American and Asia Pacific regions will continue to be dominated by replacement and upgrades to LTE with the addition of 5G equipment gaining share starting in 2019.