DriveNets, a provider of networking software and network disaggregation solutions, shared the results of a global IP networks survey conducted by Heavy Reading.

The survey said 7 percent of network operators surveyed are fully satisfied with their network providers. High costs, lack of openness and innovation are cited as the main sources of dissatisfaction with their current network vendors.

The survey also found increasingly high adoption of network disaggregation. An average 35 percent of service providers surveyed are already in the process of adopting modern cloud-native or disaggregated networks – from access to core – while more than 50 percent plan to do so within the next five years.

The survey results show that modern networks will be designed like clouds – based on cloud-native software running over a shared pool of physical resources – with complete disaggregation of hardware and software. According to the report, those who ignore these trends do so at their own peril.

Either the incumbent suppliers adapt to meet the new requirements, or they will be replaced with more responsive players, said Sterling Perrin, senior principal analyst at Heavy Reading. “Disaggregation is opening the IP market to new supplier choices that have not existed in decades, giving operators new power in the buyer-seller relationship.”

The survey results reflect the changing dynamics between communications service providers (CSPs) and cloud providers, who are becoming partners as well as competitors.

“Cloud providers are pursuing CSPs’ revenue streams,” said Ido Susan, co-founder and CEO of DriveNets. “They’re not only taking on some operational networking payloads but are also becoming a backbone alternative for enterprise services.”

AT&T’s deployment of DriveNets Network Cloud is an example of this innovation.

“AT&T deployed our technology because they are focused on building networks that are powerful, scalable, responsive to fluctuations in demand and open to new innovations. The results of this survey reinforce that most service providers have realized that a disaggregated, cloud-native network architecture will take them there.”

“We expect disaggregated routers in which the network operating system (NOS) software is sold independently from white box hardware to see their first large-scale deployments in 2021, for use in both high-capacity core networks and as cell site devices in mobile backhaul networks.”

In addition to the high level of dissatisfaction with current network suppliers, the report covers the level of adoption of disaggregation, the benefits of deploying disaggregated and cloud-native technologies, and the challenges operators will face if they don’t evolve to new network architectures. 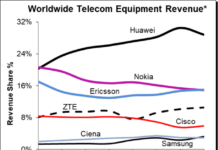