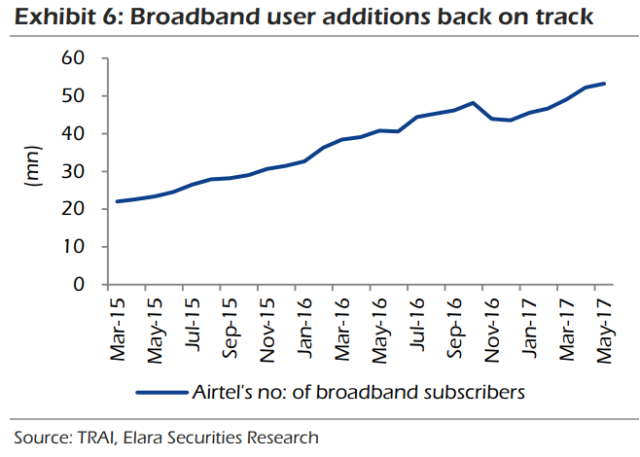 Elara Securities has analyzed some of the main achievements of Bharti Airtel following Reliance Jio’s launch of free data on its 4G network and VoLTE voice services.

The 4G services from Reliance Jio have acted as a catalyst to Airtel. Average revenue per user (ARPU) had been stagnating for Airtel prior to Reliance Jio’s commercial launch in September 2015 with voice minutes of usage (MoU) flattening and data consumption making relatively slow progress.

“The launch of Jio’s free offer had the beneficial effect of catalyzing category growth for data and even renewing voice MoU growth. There was an uptick in elasticity at the aggregate level for Airtel’s data subscribers in the period following Reliance Jio’s commercial launch,” said Ravi Menon of Elara Securities. 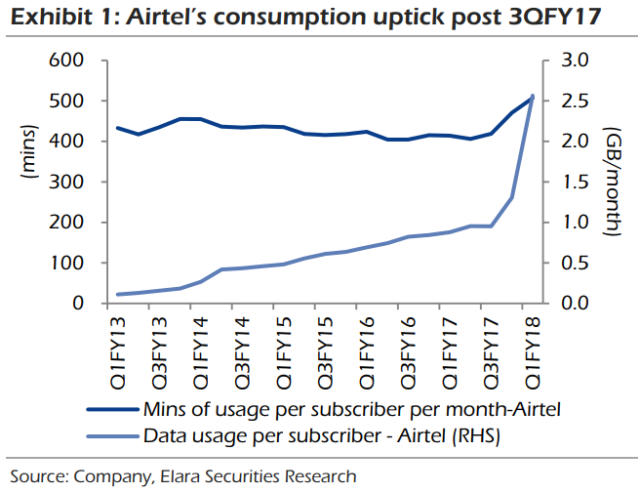 “Given free unlimited calls and data by Reliance Jio, we should have seen elasticity trend towards zero for Airtel users as marginal users ought to have moved entirely to Reliance Jio. The rebound in elasticity for Airtel suggests Reliance Jio is still not seen as a close substitute,” Elara Securities said in its latest analyst note. 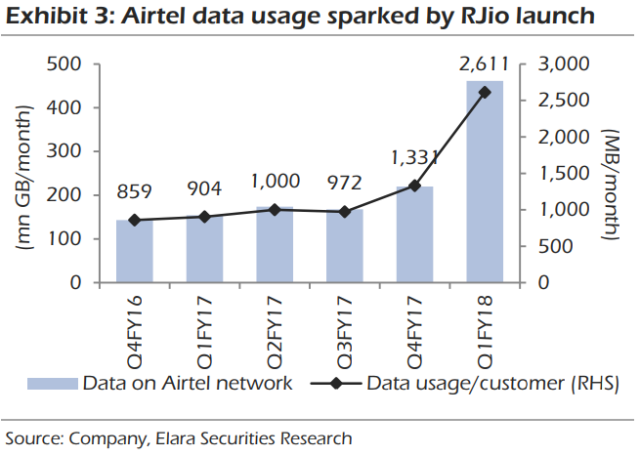 Positive network externality effects of data usage are already visible in India’s telecom industry, and this will help Bharti Airtel monetize its 4G network investments quickly, especially considering its investments can be done judiciously based on data usage at each site.

After the initial decline in Q3 FY17 as several multi-SIM users switched to using Reliance Jio to take advantage of the free offer, Airtel, with the largest number of broadband subscribers among circle leaders, has seen strong additions to its data user base.

Airtel’s broadband user base had declined briefly as many users flirted with using Reliance Jio during its initial commercial launch period with its totally free service during September 5-December 31, 2016. Despite Reliance Jio extending the free offer to March 31, 2017, Airtel has added broadband users at the fastest clip since July 2016 after it too dropped data tariffs.

Elara Securities expects Airtel to look at increasing its market share nationally with emphasis on the profitable circles where it is currently #3 or below. The need to evaluate performance circle-wise is evident when looking at wide variance in subscriber and revenue market share (RMS) in the circles.

“Bharti Airtel will use the opportunity of the current competitive environment to gain subscribers and revenue market share in circles of Maharashtra, Gujarat, Kerala and Mumbai, which together account for 24.7 percent of adjusted gross revenue for access services in 4QFY17,” Elara Securities said.

ARPU improvement from higher wallet share per customer is likely, given attractive benefits that circle leaders have been offering in response to Reliance Jio. For example, Airtel has seen an ARPU rebound in Kerala by 11.2 percent to INR 110.7 in Q4 FY17. Airtel also improved its RMS by 200bp in Kerala in Q4 FY17 (the best gains it has made in a quarter in this circle since 2QFY09).

Despite the launch of VoLTE feature phone, Reliance Jio’s subscriber market share is unlikely to cross 18-20 percent unless it drops tariffs further. Any such subscriber additions will be temporary, given stickiness with the primary number and optimized networks of the circle leaders.

This will lower network operating cost in sites where this is deployed as this equipment is more energy-efficient. Airtel may reuse older 2G and 3G equipment in either new towers that help improve coverage further or upgrade sites that are currently only voice. This network rollout strategy to limit Capex needs for equipment and limit the increase in network operational expenses (network Opex).

Bharti Airtel is in the process of upgrading its sites from indoor BTS to outdoor. This provides a 25 percent energy savings, as per management. Airtel has only converted 48,973 of its total 162,000+ sites to outdoor BTS equipment. This implies 70 percent of its network energy cost can be potentially reduced by 25 percent. In addition to this, the new BTS equipment has intelligent shutdown that allows for energy savings during non-peak hours.

SC allows Vodafone and Airtel to clear AGR in 10 years