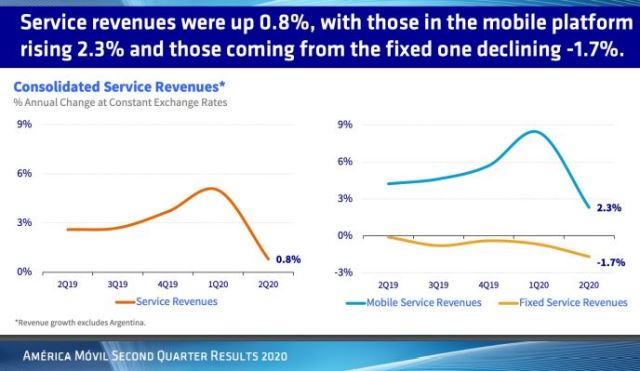 America Movil CEO Daniel Hajj did not specify the amount. America Movil is likely to cut its spending towards the building of 5G network in Brazil and Mexico.

America Movil said it disconnected 5 million wireless clients in the second quarter — 4.6 million prepaid clients, including 1.7 million in Mexico, 1 million in each of Peru and Central America, and 476 thousand in Ecuador.

America Movil CEO said on Wednesday that the company regards Huawei Technologies based in China as an excellent telecoms equipment provider, but it can use other vendors if necessary.

Huawei is the largest telecom network supplier in the world. Huawei is currently facing a ban in the United States and United Kingdom.

Telecom operators are trying to balance the need for the Chinese company’s affordable and reliable equipment with the U.S. campaign to steer countries away from using its gear.

“We think Huawei is an excellent provider,” said America Movil Chief Executive Daniel Hajj in response to questions on a conference call about moves to stop Huawei from doing business in some countries.

But “there are other vendors we can use,” he added.

As early as the 1990s, Huawei executives began pitching their services in Mexico. Competing on price and recruiting talent, Huawei won big share of the market, supplying virtually all major players including the leader America Movil, Reuters reported.

The Donald Trump administration has said top Chinese firms, including Huawei, are owned or controlled by the Chinese military, laying the groundwork for U.S. financial sanctions.

Separately, America Movil said one of its units, AMCO, had formed a strategic partnership with U.S. firm Verizon Media for its advertising business in Mexico.