Axiata, which has a strong presence in several countries in Asia, today said it will lower its Capex for 2019 against the earlier guidance of RM6.8 billion or $1.62 billion. 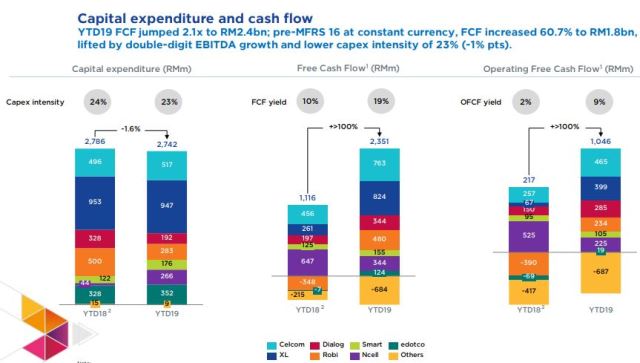 Axiata’s main operations in Asia are through Celcom in Malaysia, XL in Indonesia, Dialog in Sri Lanka, Robi in Bangladesh, Smart in Cambodia and Ncell in Nepal.

Axiata said the reduction in Capex in telecom networks is in line with the company strategy — Shifting Gear — to rationalize expenditure.

Tan Sri Jamaludin Ibrahim is the president and group CEO of Axiata. Vivek Sood is the group CFO of Axiata.

The Asian telecom operator has achieved 38.1 percent EBITDA margin by registering 3.3 ppt EBITDA margin growth during the second quarter of 2019. EBITDA of Axiata increased 13.1 percent to RM2.3 billion due to higher revenue and cost excellence.

Axiata said in a statement issued on Thursday that it is likely to exceed its 2019 headline KPIs for EBITDA growth and ROIC.

Axiata said revenue rose 3.7 percent to RM6.2 billion in Q2 2019 due to better performance from all operating companies apart from Celcom and Ncell.

XL Indonesia’s revenue grew 16.2 percent to RM1,824 million on the back of strong data growth. EBITDA rose 54.1 percent to RM941.4 million. PAT of XL Indonesia increased significantly to a net profit of RM43.0 million as opposed to net loss of RM28.7 million in Q2 2018.

Robi in Bangladesh clocked revenue growth of 17.7 percent to RM914.4 million contributed by strong growth in all segments. EBITDA improved from RM147.5 million to RM414.8 million quarter-on-quarter due to higher revenue coupled with lower operating expenses.

Ncell in Nepal said its revenue dropped 6.1 percent to RM520.8 million due to a decline in almost all revenue segments as impacted by changes in Telecommunication Services Charge in Nepal since July 2018. EBITDA dropped 15.6 percent to RM294.6 million. PAT fell 18.4 percent quarter-on-quarter to RM154.0 million.

Axia said it gained RM96.1 million or INR1,617.4 million by selling its balance stake in Vodafone Idea, a leading telecom operator in India, during the rights issue in April.