China Mobile said it aims to raise up to 56 billion yuan ($8.8 billion) in a Shanghai public offering, a year after being kicked off the New York Stock Exchange.

US has blacklisted Chinese companies, including AI company SenseTime Group, over allegations of human rights violations, and finalized rules to kick non-compliant Chinese firms off American exchanges in three years. SenseTime has delayed its IPO in the wake of the blacklisting.

China Mobile, , the world’s largest mobile network operator by total subscribers, said in a prospectus that it plans to sell up to 845 million shares at 57.58 yuan apiece, raising as much as 48.7 billion yuan before an over-allotment option is exercised.

After that option is fully exercised, it will raise up to 56 billion yuan, China Mobile Chairman Yang Jie said in a media statement. China Mobile did not reveal the purpose of the fund raising.

China Mobile, China Telecom and China Unicom were delisted from the New York stock exchange after a Trump-era decision to restrict investment in Chinese technology firms.

According to accounting firm EY, five of the top 10 Hong Kong listings in 2021 were secondary listings of U.S-listed Chinese companies, including Baidu and Bilibili. 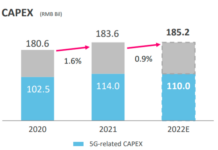