The decision by Airtel, Vodafone Idea and Reliance Jio to raise tariffs from December 2019 and a two-year moratorium on payment of spectrum dues are positive for the industry, Fitch Ratings says.

However, these are unlikely to be sufficient to offset the impact of a recent Supreme Court judgement for Bharti Airtel (BBB-/Rating Watch Negative) and Vodafone Idea, Fitch Ratings said today.

Goldman Sachs estimated that the two-year moratorium on payments (in FY21 and FY22), Bharti Airtel and Vodafone Idea can potentially save $2 billion and $3.3 billion, respectively, over this period, amounting to 41 percent and 52 percent of their respective AGR-related liability.

“While this moratorium helps near-term liquidity for telcos, especially Vodafone Idea, we do not see this improving balance sheet leverage of the company, which stood at 20x (net-debt-to-Ebitda) as of September 2019. For Bharti, this moratorium will help better meet any potential AGR-related liability,” the report said.

Meanwhile, media reports today said Airtel and Vodafone Idea will be approaching the Supreme Court for a review of its decision.

Reliance Jio, a subsidiary of Reliance Industries (RIL, BBB-/Stable) is not affected by the ruling and is likely to continue to gain revenue market share.

Fitch has a negative outlook on the sector for 2020 primarily due to heightened financial risk associated with the large unpaid AGR-related dues.

The government decided to suspend payment of deferred spectrum dues on November 20. Vodafone Idea and Bharti Airtel will benefit the most as their negative free cash flow will reduce by $1.7 billion and $850 million a year, respectively, for the financial year ending March 2021 (FY21) and FY22.

Fitch believes it will take negative rating action on Bharti if it pays the AGR dues within three months and funds the payments entirely by debt. This is because Airtel’s FFO adjusted net leverage will deteriorate to around 3.0x-3.3x in FY20 – significantly higher than the threshold of 2.5x.

Jio gained about 24 million customers during the quarter to reach a total subscriber base of 355 million, ahead of Vodafone Idea’s 311 million and Airtel’s 279 million, according to the latest statistics from telecom regulator TRAI.

Jio’s average revenue per user (ARPU), which does not include interconnection revenue, was flat at around INR120 even as data consumption increased to 12GB per month per use.

Indian mobile operators’ ARPU per month is low in Indian at about INR120 (USD1.7) – one of the cheapest in the world. Assuming a 10 percent tariff hike, the revenues of Bharti Airtel and Vodafone Idea will each increase by $400 million-500 million, while EBITDA would grow by $200 million-250 million.

Jio is likely to benefit more from the wireless tariff hikes as it is rapidly gaining market share, and is on its way to achieve at least 400 million subscribers and around 40 percent of industry revenue by 2H20. 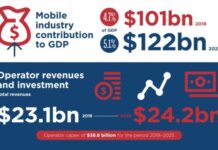