Telecom Commission’s decision to allow merger and acquisition (M&A) among mobile operators whose combined market share does not cross 50 percent will pave way for consolidation in the industry.

The earlier market share cap was 35 percent. The M&A policy – approved by Telecom Commission – is not final and it has to be approved the Cabinet.

The interesting aspect is that the new guidelines will allow merger between Bharti Airtel (with 22.21 percent market share) and Vodafone (17.87 percent), the largest two telecoms in India. In the earlier scenario, merger between them was not possible. If they do a proper cleaning of mobile subscribers, even Idea Cellular, which has 14.61 percent share, can join Bharti Airtel and Vodafone.

If AT&T decides on the proposed Vodafone deal, the American telecom giant may not be willing to stay in India. This will be a good opportunity for Bharti Airtel and Vodafone to join hands. AT&T wants to focus on European markets. America Movil is also interested in India.

Bharti Airtel chairman Sunil Mittal earlier said it would participate in Indian telecoms’ consolidation efforts. SingTel is the single largest shareholder in Bharti Airtel and it wants Airtel to become active in India. Manoj Kohli, who returned to India, is currently looking after its consolidation moves. 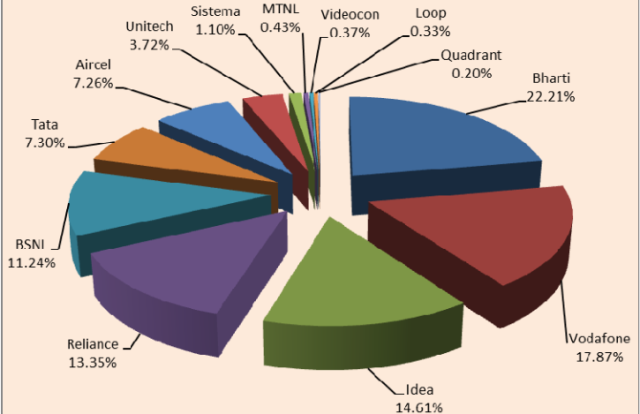 Following the announcement, shares of Airtel fell 1.17 percent on Wednesday. On the other hand, Reliance Communications and Idea Cellular gained 0.94 percent and 0.72 percent, respectively.

Though the increase in cap to 50 percent will be an incentive, Telecom Commission’s eagerness to cash in on the consolidation movements by charging for spectrum will hurt the M&A aspirants such as Bharti Airtel, Sistema Shyam TeleServices, Tata Teleservices, Aircel, etc.

The main block is that the acquiring company has to pay a market price of spectrum if it has been administratively (and not an auction) assigned to the acquired company. This clause will create challenges, industry experts warned.

The new M&A guidelines says the companies will also be allowed to retain two blocks of 3G spectrum in respective areas as a result of the merger.

Echoing the response of AUSPI, COAI (Cellular Operators Association of India) director general Rajan Mathews said spectrum trading will have to play a big part of this policy and the mobile industry has to wait till the rules on that are clearer.

A senior official with a telecom operator, who is looking for favourable M&A guidelines, said the need to pay market price for spectrum is a disincentive.