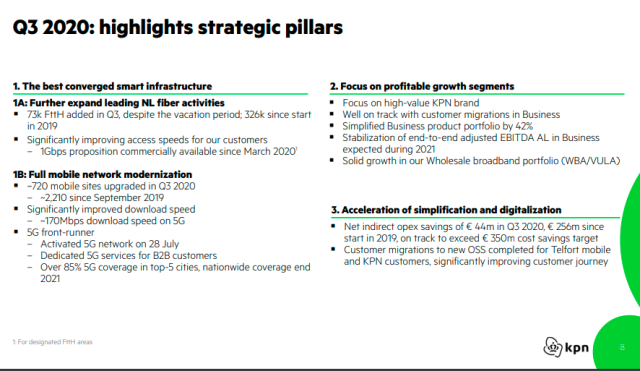 KPN lowered its personnel expenses by 15 percent, mainly driven by the digital transformation of KPN and lower costs due to COVID-19.

KPN said it has added 73000 FTTH households. KPN upgraded  720 mobile network sites with the latest mobile RAN equipment in the quarter, ~2,210 since September 2019.

KPN said the addition of 27000 fiber customers was supported by the improved commercial strategy accompanying the fiber roll-out and successful SuperWiFi campaign.

KPN also activate 5G network in July. KPN did not reveal the response to its 5G business. 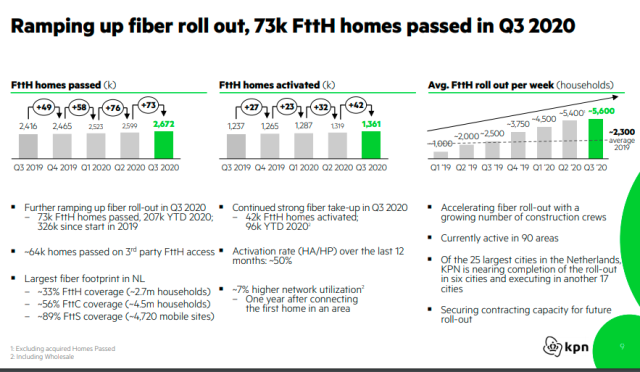 On the modernized network, download speeds increase significantly, reaching approximately 170Mbps on 5G, while also improving the energy efficiency of the network. Approximately 50000 legacy lines are left to be migrated to IP-based infrastructure.

KPN completed the migration of Telfort Mobile and KPN customers to the new Operational Support System, reducing the lead time of new broadband customers and strongly improving the customer journey. KPN is currently piloting an initiative to store renewable energy surpluses using the back-up batteries in local exchanges to support the energy transition in the Netherlands.