MTN Consulting has released a report showing the growth in capital expenditure (Capex) of top mobile operators during the fourth quarter of 2019. 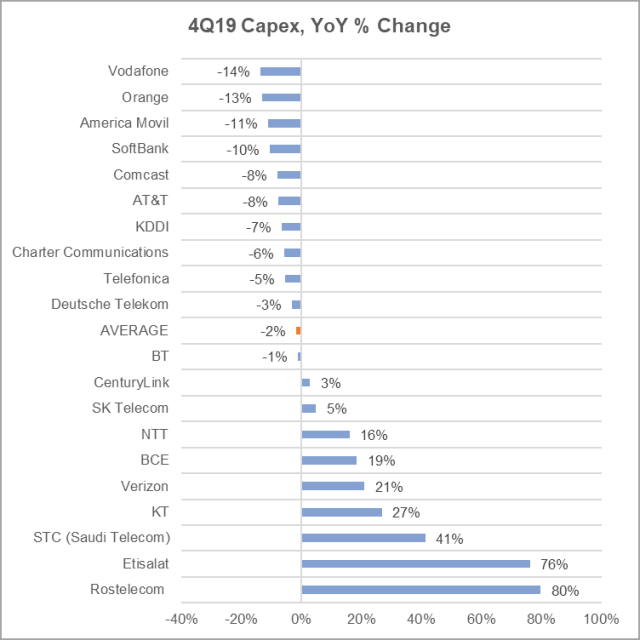 Reliance Jio’s Capex fell 78 percent to $421 million. Jio, the largest 4G operator in India, has completed the expansion of its 4G network.

Liberty Global’s Capex dropped 64 percent to $343 million in 4Q19. Liberty sold properties in four countries to Vodafone in July 2019, reducing the asset base. Another factor is that the cost of Project Lightning in the UK (Virgin Media) is trending down.

True Corp, a mobile operator in Thailand, slashed Capex 58 percent to $253 million. True notes that 4Q18 base period included a surge in fiber/FTTx spending. Even with the decline, Capex / revenues in 4Q19 of True was still over 20 percent.

Telstra, a leading telecom operator in Australia, cut its Capex by 41 percent to $515 million in 4Q19. Telstra is expecting to enhance 5G spending in the next six months.

Vodafone Group’s Capex dipped 14 percent to $2.34 billion. Vodafone reduced Capex due to tower sharing, plus pause due to regulatory uncertainty around Huawei. Capital intensity will rise in future due to recent acquisition of Liberty cable assets.

Veon, a mobile operator in Russia with presence in some of the global markets, increased its Capex by 97 percent to $682 million. Veon committed Capex in order to improve its position in Russia and enhance 4G services in growth markets.

Etisalat, a leading mobile operator in the Middle East, has increased its Capex by 76 percent to $505 million. The investment focus of Etisalat in the UAE was on the deployment of 5G network, investment in data centres and network modernization.