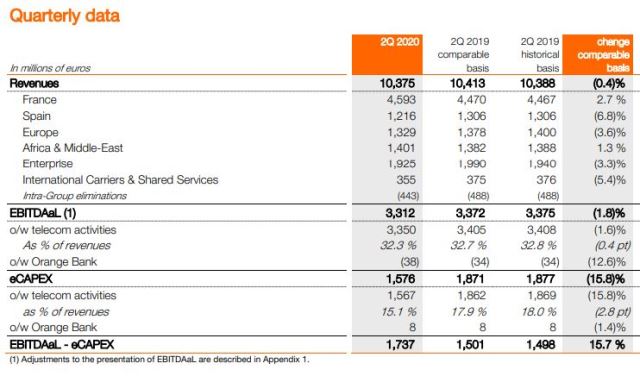 Orange group doesn’t use mobile equipment made by the Chinese firm in France, in contrast with Spain and Poland, its two biggest markets on the continent after its home country.

“In Europe there are countries where we use Huawei, but the medium term trend is to reduce the proportion of parts of Huawei in our network equipment,” Stephane Richard said in a call with analysts.

“In Africa (where the group also has operations), the question is much less sensitive and relevant than in Europe,” he added.

Orange Group’s Capex declined 9.9 percent in the first half and 15.8 percent in the second quarter due to the increase in co-financing in France and to disposals of assets, in particular the disposal of non-strategic towers in Spain.

This decrease is also explained by a slowdown in investments in mobile and traditional services that offset growth in FTTH investments, particularly in France, which were lower than expected following the health crisis, Orange said.

Orange Group revenues rose 0.3 percent to 20.8 billion euros in the first half year, fuelled by the momentum of the 1st quarter (+1.0 percent) while 2nd quarter 2020 revenues were down (-0.4 percent), negatively impacted primarily by the decline in roaming and equipment sales directly linked to the health crisis.