Orange Group announced marginal decrease in revenue, increase in Capex and increase in EBITDA during the first quarter of 2019. 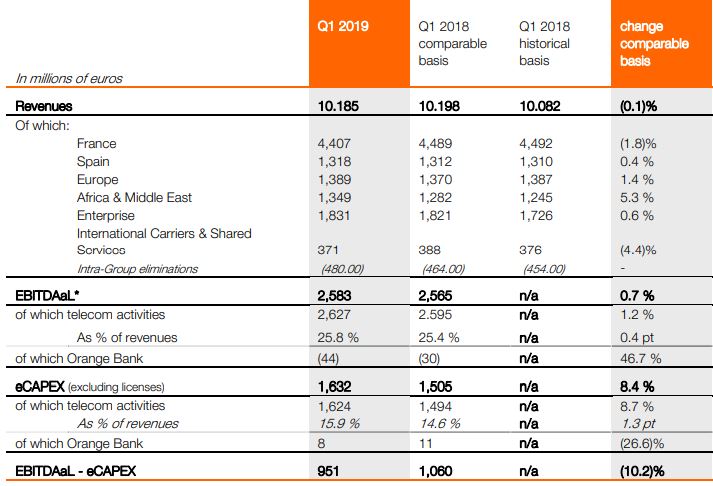 Estimated Capex for 2019 will be slightly lower compared to 2018. Orange did not reveal the specific drop in Capex.

Orange Group earlier said it will start the deployment of 5G network in 17 towns and cities in Europe in 2019, targeting for the commercial release in 2020. Orange did not reveal the name of countries, where its 5G network will be live in the initial phase.

“The Group succeeded in maintaining its high quality commercial performance in spite of a particularly challenging competitive context notably in our two principal countries of France and Spain,” Stephane Richard, chairman and CEO of the Orange Group, said.

Orange revenues dropped 0.1 percent to €10.2 billion in the first quarter. Performance in France was the main factor that pulled down its first quarter revenue.

Orange had 10.506 million convergent customers across the Group at 31 March 2019. The telecom operator added 163,000 mobile phone customers in the first quarter to take the total subscriber base to 203.781 million.

Orange had 20.275 million fixed broadband customers, with a net addition of 130,000 in the first quarter.

Capex of Orange was €1.6 billion (+8.4 percent) in the first quarter driven by the acceleration of the rollout of FTTH in France, and 4G network investments.