Mario G. Tamayo, senior vice president for Network Planning and Engineering of PLDT and Smart, has revealed the telecom operator’s main achievements in the Philippines in the first half of 2019.

PLDT’s Capex was Php32.7 billion in the first half of this year, enhancing the capacity of its fiber-powered fixed line broadband network and LTE and 3G mobile data networks, as well as modernizing the IT support systems.

PLDT increased the coverage of our fiber-powered fixed broadband network to 6.9 million home passed up from 6.3 million homes passed as of end 2018.

PLDT earlier said it aims to spend Php78.4 billion as part of the capital expenditure program in 2019.

Ookla in its July 2019 report named PLDT and Smart as the fastest fixed and mobile data internet services in the first half of 2019. The Ookla report showed PLDT and Smart posting download and upload speeds nearly double that of the competition.

PLDT and Smart had previously won several internet speed awards from internet testing agencies such as OpenSignal and Tutela.

“The roll-out of our fiber network remains the cornerstone of our network build out. That is because fiber provides the best possible internet service for home and enterprise, supports the deployment of LTE and, in the future, 5G,” said Mario G. Tamayo, senior vice president for Network Planning and Engineering of PLDT and Smart. 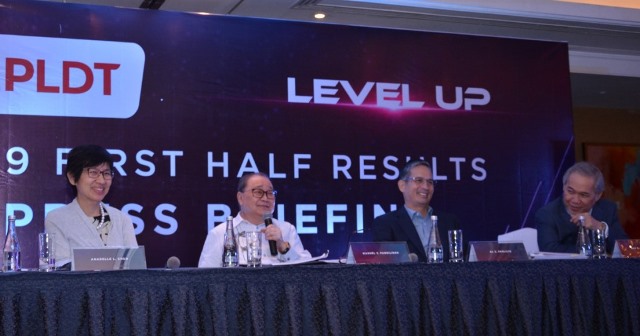 “We will be enhancing customer experience across businesses through organizational adjustments and the overhaul of our IT systems and customer service processes,” said Manuel V. Pangilinan, chairman and CEO of PLDT.

The consumer wireless revenues was powered by subscriber growth, adoption by subscribers of LTE SIMs and LTE smartphones, increasing data usage for video and games, and a clearly higher level of customer experience provided by the superior mobile network of Smart.

Smart, TNT and Sun acquired 8.7 million new subscribers in the first half of 2019, taking the total to 66.8 million plus in June 2019. The ARPU of an LTE user is nearly double that of a 3G user and almost 2.5x that of a feature phone user.

The data traffic reached 670PB at the end of June 2019 registering 113 percent growth from the same period last year and 31 percent from the second half of 2018. Data traffic more than doubled year-on-year to 366PB in the second quarter alone.