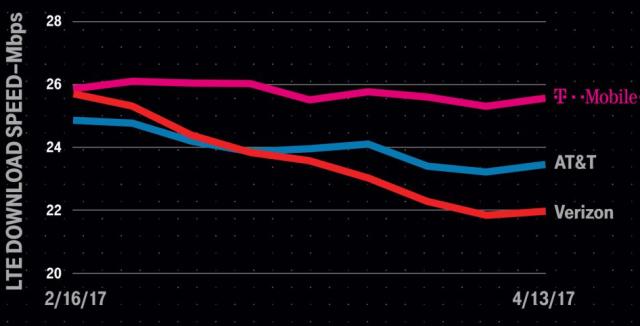 T-Mobile said users of the latest smartphones such as Samsung Galaxy S8 can enjoy double speed — up to gigabit-class speeds – on its LTE network.

Yesterday, T-Mobile celebrated Verizon’s loss of 307,000 postpaid customers, a record for Verizon, in Q1 2017 despite reinstating unlimited data plans in February. T-Mobile US will be revealing how many wireless customers it received from Verizon.

US-based analyst firm TBR, in a research note on Thursday, said that Verizon’s weakening postpaid performance indicates the bulk of consumers no longer view the quality and coverage of Verizon’s LTE network as a strong enough differentiator to warrant a premium price tag.

“Watching what the carriers’ new unlimited plans are doing to their networks is like watching a train wreck in slow motion – emphasis on slow,” said John Legere, president and CEO of T-Mobile.

Customers who pick up the latest phones at T-Mobile can save hundreds annually over Verizon and AT&T with T-Mobile ONE.

On T-Mobile plans, if the network becomes congested, top 3 percent of data users (>30 GB/mo.) may notice reduced speeds due to prioritization.

Steve Vachon, analyst at Technology Business Review, said Verizon faces a predicament in 2017 as the carrier will need to discount its unlimited data plans to compete with T-Mobile One and Sprint Unlimited Freedom, but that strategy would diminish ARPU and unlikely generate sufficient subscriber additions to improve service revenue.