Tata Teleservices, MTS India and Aircel have kicked off merger talks in the country. If the deal goes through, the combined entity will have 15.4 percent market share in the Indian mobile market.

You may read this as well:

In the second position is Vodafone India with 17.75 percent market share in the domestic mobile market.

The combination of MTS-Aircel-TTSL will depend on the forthcoming merger and acquisition guidelines being announced by telecom minister Kapil Sibal.

All three telecom operators – MTS, Aircel and TTSL – are struggling to gain market share in India. 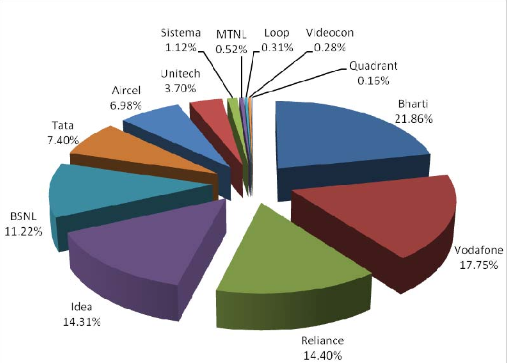 At present, the CDMA telecom operator MTS India, owned by Sistema of Russia, has 1.12 percent share in the Indian wireless market.

Aircel, which has reduced telecom exposure and owned by Malaysia’s Maxis, has 6.98 percent share.

The mobile market share of Tata Teleservices, which has investments from Japan’s NTT Docomo, is around 7.4 percent.

The report says the talks are in preliminary stage. If the transaction materializes, it will allow the companies to cut costs, share infrastructure and pool capital.

Both Tata Teleservices, which is 26 percent owned by Japan’s largest mobile company NTT Docomo, and Aircel have been struggling to pare their debt – around Rs 23,000 crore and Rs 22,000 crore, respectively.

Sistema, owner of MTS India, would be the dominant shareholder if the three companies agree to merge. The company, which is partly owned by the Russian government and operates in India through a joint venture with Shyam Telecom, has identified consolidation as the route to growth in the Indian market.

The ET report says the government will shortly announce revised M&A guidelines for the sector. But foreign operators such as Sistema are concerned that the new policy might make it compulsory for the buyer to pay an additional amount to the government for the acquired airwaves, thereby increasing the total acquisition cost.